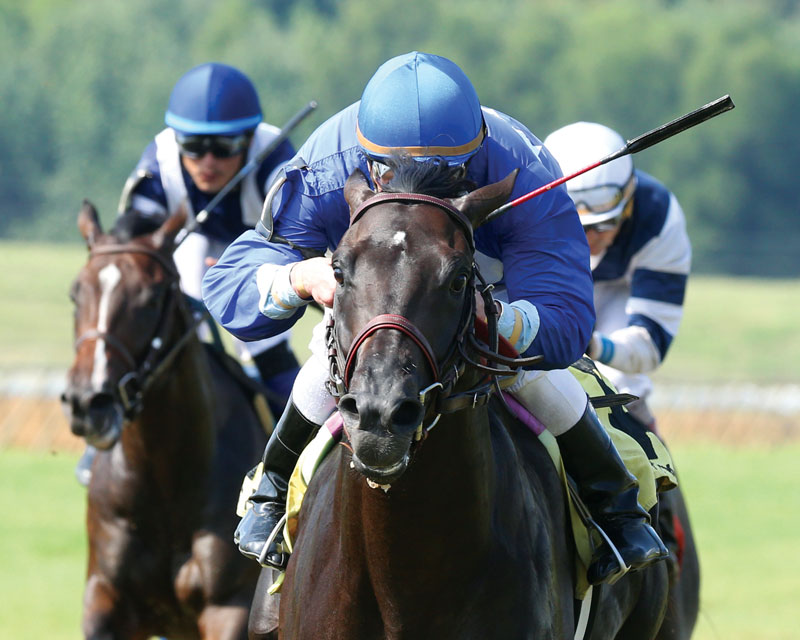 Three-time Kentucky Derby winner Calvin Borel resumed his race-riding career Saturday at Ellis Park, with a third and fourth in two mounts, and you’d think he’d been retired five years rather than five months from the love-fest he received.

Fans lined up for more than the scheduled hour autograph and picture-taking session in the grandstand with the 49-year-old Hall of Fame jockey. The 2-year-old Kiss My Note, a first-time starter, was 9-2 in the morning line but bet heavily in early action and still went off the 2-1 favorite. He was head-and-head for the lead with eventual winner Chargin Storm, who had run well in his third prior starts, before tiring in the final sixteenth to finish third, a half-length out of second.

“It felt real good,” Borel said afterward. “He needed the race more than anything. He got a little tired. He ran third, ran a big race. Yes, I would have loved to win, that’s why I’m here — to win. I wouldn’t be here if I didn’t want to win, but the colt ran a big race.”

And about his first race in five months?

“I feel good. I got a little more tired than I thought I would, but I feel good.”

So who got more tired?

“I don’t know, to tell you the truth,” Borel said with one of his frequent laughs. “I had to carry him the last part, trying to run second at least. He got a little heavy, just like me — we both needed it.”

“I’m just happy to see him here. I’m a huge fan,” said Julie Spear, adding of the movie about his 2009 shocking Kentucky Derby winner Mine That Bird, “He was so funny in the movie ‘Fifty-to-1.’ He was hysterical in it. I’m surprised he hasn’t taking up acting since then.”

Borel is the only jockey to win the Kentucky Derby three times in four years: Street Sense in 2007, Mine That Bird in 2009 and Super Saver in 2010. He’s also the only jockey to talk off a Kentucky Derby winner for the Preakness, when Borel opted to ride the filly Rachel Alexandra, who had won the Kentucky Oaks by a record 20 lengths. Rachel Alexandra defeated Mine That Bird in the Preakness two weeks later and went on to beat the boys again in Monmouth Park’s Haskell and Saratoga’s Woodward against older males en route to Horse of the Year.
Borel is such a fan favorite that his sudden retirement March 27, 2016 with three weeks left in Oaklawn Park’s meeting was so out of character. He talked to few people and didn’t respond to overtures from Oaklawn and Churchill Downs about holding days in his honor.

Asked if that was because part of him thought it wasn’t final, Borel said with a laugh, “Not part of me, all of me. No, I wasn’t ready to retire. I just had to get away for a little while, get a load off and come back. That’s life. I’m too young and I’m too healthy, and I love to do it. I was far from ready to quit. So I’m back. Wouldn’t trade it for the world.”

Borel has acknowledged that last winter he was trying to work through what proved the disintegration of his relationship with his long-time girlfriend, that it impacted his riding and that he quit to join her in Florida. But the slower pace of the hunter-jumper world made him realize that he needed to be back in horse racing.

“It’s awesome,” Borel, a two-time riding champion at Ellis Park, said during the autograph sessions. “I’ve been here and did it for a while. And I’m back. Believe me, it’s good to have good fans. If you’re a little successful, they kind of follow you. I’ve had a lot of fans follow me my whole life. I’ve been very fortunate. After you win the Derby, you become a little special, I guess. There’s nothing like the Derby. You can win every race you want. But when you get on a plane, I don’t care if you win the Breeders’ Cup, Preakness, Dubai World Cup, everybody knows the Derby. And when you can say you won three out of four years, that’s pretty strong. That’s real strong. It makes me happy, proud of who I am. Since then, my fans have followed me.

“I got away for awhile, for different reasons. But I’m back and I love it that they haven’t forgotten about me.”

One of the first people Borel confided in about his return was Buff Bradley, owner-trainer of Kiss My Note. In fact, he stayed at Bradley’s farm near Frankfort when he came for a visit in early July. Borel has said getting back to the track just made him want to return more.

“For a first-timer for me, I thought if he could hit the board, I’d be very pleased,” Bradley said. “Turning for home, I was very excited that he was very much in the race. You could tell he got tired at the end. But he got a race under him now. He’ll be ready to go.”

That was an apparent reference to Borel as much as Kiss My Note.

“I know his fellow jockeys like him, too,” Bradley said. “They’re excited. A lot of people had talked to me about it, and other jockeys. They’re glad Calvin is back.”

Agreed Jon Court, who has ridden with Borel for what is becoming decades: “We love to have him back. We missed him. He’s the old Calvin, great to be around. His retirement surprised everybody, but he had to take some time. I could tell something was bothering him, I didn’t know what it was. He was always cheerful, never disclosed what was bothering him. Not that it was obvious, but being around him so long, I knew there was something. Great rider.”

Borel also picked up the mount on Tiz Too, who rallied late in the mile turf allowance and narrowly missed third, for trainer-owner Tim Richardson of Louisville. Richardson said he learned Saturday morning that his scheduled rider couldn’t make it because of a riding obligation elsewhere.

“I saw Calvin was open,” Richardson said. “Calvin and I go way back. My wife, Renee, used to pony horses at Churchill, so we know Calvin. He rode a filly for us the same week he rode Mine That Bird and Rachel Alexandra. She won that day. Matter of fact, he mentioned her on the ESPY Awards. They interviewed him on ESPN and said, ‘How did your week start? You had one heck of a week.’ He said, ‘Well, I started out winning on a little mare called La Rockette.’ I said, ‘My gosh, that’s the most famous $5,000 horse in America right now.’ Calvin doesn’t forget the little guy. He gave her the kudos for getting his week started off right.

“We love Calvin. He could be on a couch for a year and we’d ride him. He’s the best.”

“It was an awesome day,” Borel said. “The colt (Kiss My Note), he ran good. This one (Tiz Too), he ran OK. Turning for home, I thought I had a little bit more horse. He kind of faltered a little bit. I don’t know why, but he did. But the first-time starter for Buff, he ran a good race. First-time starters for Buff, I think it takes a race, the way he trains his horses and gets them ready.

“I’m pretty fit. I feel real good. I’ve got another filly I ride tomorrow, in fact for Buff, that I like a lot. I feel good, and I’m happy to be back.”

He said of the fan reaction: “Unbelievable. In fact, it scared my horse. But it’s awesome. I mean, you can’t beat the fans. When you’re in this business, they love you and you love them.”

“I felt real good. I finished up good on him, looked good on him. I came back and watched the replay. I feel good. It will take maybe two or three more races to get everything back in my brains. But that’s something you win and don’t lose, like riding a bike.”