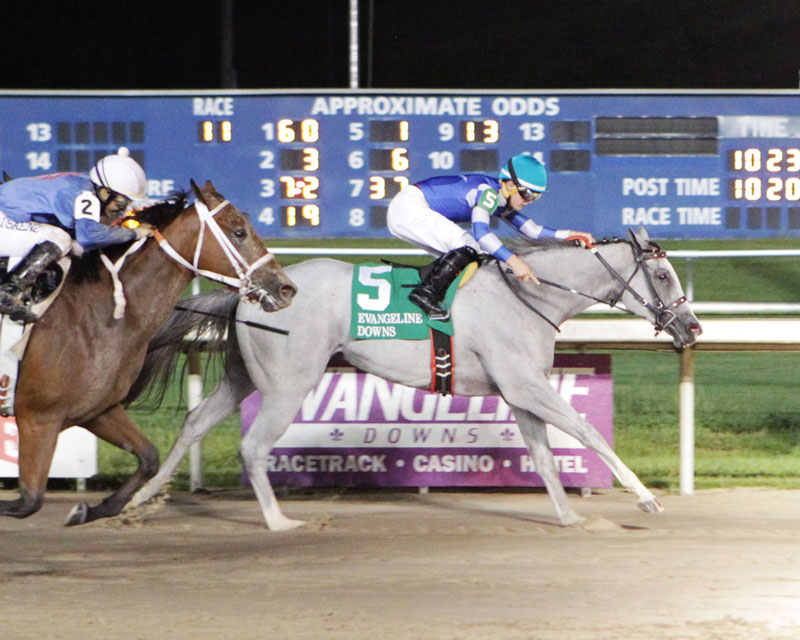 After two previous strong efforts against stakes company, Texas-bred Country Candy became a stakes winner on August 27 as she scored a half-length victory in the $60,000 Evangeline Downs Princess Stakes in Louisiana. The J.R. Caldwell trainee went wire-to-wire under jockey Colby Hernandez and got the six-furlong distance in 1:13.25.

Bred and sold by Asmussen Horse Center for $65,000 at the Texas 2-year-olds in Training Sale, Country Candy has now earned $70,780 with a record of 4-2-1-1 for owner Danny Keene’s Keene Thoroughbreds LLC. The daughter of Intimidator, who stands at Asmussen Horse Center in Laredo, Texax, broke her maiden at first asking at Lone Star by nearly 10 lengths. She then finished third in the Debutante Stakes at Churchill Downs and second in the Prairie Gold Lassie Stakes at Prairie Meadows in Iowa.

The closing night card at Evangeline also featured the $60,000 Evangeline Downs Prince. Thegreatcollection broke slowly from the inside post position under jockey Colby Hernandez before hugging the rail in the six-furlong test for 2-year-old colts and geldings. After Shackelford’s Storm led through an opening quarter-mile in 22.58 seconds, Thegreatcollection began a rally as the field reached the top of the stretch and the rail opened up to his liking. Once the rail opened up for him, Thegreatcollection rolled through impressively and drew off to a 4 ¼-length victory in a final time of 1:12.81 for the six furlongs on the sloppy main track.

Thegreatcollection remained undefeated in his brief career with the victory, moving his record to 2-for-2. He earned $36,000 for the win, which increases his lifetime earnings to $46,400. The Efren Loza, Jr. trainee was bred in Florida by Kathleen Amaya, Alexandro Centofanti and Raffaele Centofanti. The colt was sired by Saint Anddan and is out of the Cactus Ridge mare, Cactus Cadillac.