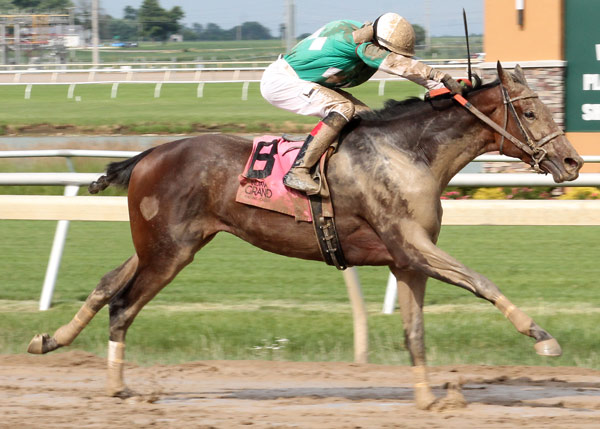 Badabing Badaboom and jockey Marcelino Pedroza appeared from the back of the pack in the stretch and never looked back, rallying home to a five and three-quarter length win in the ninth running of the $100,000 Hoosier Breeders Sophomore Stakes for Indiana-bred colts and geldings on Wednesday, June 22 at Indiana Grand.

Starting from post eight, Pedroza has gotten to know Badabing Badaboom well this spring, riding him in three of his four previous starts. Therefore, early speed from the gate was not an option in the one and one-sixteenth mile event over the muddy track. Derby Express and Malcolm Franklin showed early speed from the center of the track while Mr. Manning and Leandro Goncalves held their own along the rail and Sights and Sounds with Francisco Torres aboard joined the early fray into the first turn. Mr Manning and Sights and Sounds matched each other stride for stride early on with fractions of :23.43 and :46.49 were placed on the board. Neither horse was giving in easily and held their positioning around the final turn. Badabing Badaboom began making forward movement down the backstretch but it wasn’t until the stretch that his momentum took over.

Badabing Badaboom went right by the top horses and never looked back, coasting to an easy win over the rest of the field. Mr Manning held on for second over a close photo with Grand Ginjo and Fernando De La Cruz, who moved up the inside to secure third.

“He (Badabing Badaboom) won so easy last time out I felt he was deserving of a shot in the stakes,” said Pedroza.

Badabing Badaboom is now two for five in his career and has created a small two-race win streak. His earnings increased to just under the $100,000 mark with his win in the Hoosier Breeders Sophomore Stakes. The final time of the race was 1:43.88 and the backers of Badabing Badaboom were pleasantly surprised with a payout of $25.80, $16.40, and $8.00 across the board.

“This colt (Badabing Badaboom) has trained good all the way,” said Lauer. “He got injured last spring at two, so we stopped with him. We wanted to give him more time. ‘The Bing’ exploded today. He made a big move in the stretch. He likes the goo.”

Unraced at two, Badabing Badaboom comes from a second generation of horses owned, raised and trained by Penny and Mike Lauer. The Spring At Last gelding is out of the Lauer’s race mare Ring Ring Ring, a frequent runner on the Indiana circuit up until she was retired to brood mare duties in 2008.

“This is her (Ring Ring Ring) first foal and we have either a yearling or a weanling from this mare,” added Lauer. “We ought to have a contest to name that foal because he’s by Arch Arch Arch out of Ring Ring Ring.”