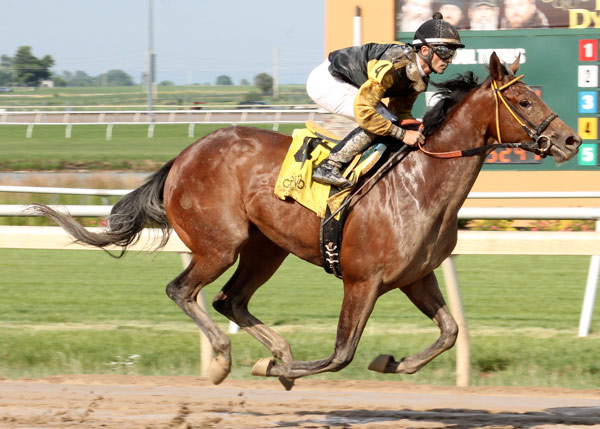 Sassy Miss Officer and jockey Leandro Goncalves sprinted home to easily win the ninth running of the $100,000-added Hoosier Breeders Sophomore Fillies Stakes at Indiana Grand Wednesday, June 22. The stakes race for three-year-old registered Indiana bred fillies was reflective of the purse increase to $100,000 for all Indiana stakes beginning in 2016.

Starting from post four, Sassy Miss Officer had no intentions of showing early speed as Tequila and Salt and Francisco Torres held their ground inside and found an immediate challenge from race favorite Carmalley Chrome and Rodney Prescott into the first turn. The two fillies hooked up early on the front and turned in blazing fractions of :22.90 and :45.64, moving away from the rest of the field by up to 10 lengths at times. As the field moved into the final turn, the gap began to close and Sassy Miss Officer was the first to catch the top two. Her momentum kept her game on the outside until the stretch arrived over the rain soaked track.

At the head of the lane, Goncalves asked the filly to advance and she took off from the field, roaring to an 18 ½ length victory at the wire. Tequila and Salt was a head winner for second over My Erin and Marcelino Pedroza. The final time of the race was 1:45.29.

“I couldn’t tell how far they (the top two) were in front of us, I just knew they were going fast,” said Goncalves. “It didn’t surprise me because the six (Carmalley Chrome) was the speed. I was more concerned about getting myself to the outside and that happened at the five-eighths. Once we cleared the top two, I couldn’t see or hear anybody behind us, so at the quarter pole, I asked her again and she took off. ”

Sassy Miss Officer, a daughter of Brother Derek, paid $12.40, $7.00, $3.40 across the board for her win, her second in a row and the third of her career. She nearly doubled her career bankroll to more than $120,000 with her first stakes win for Mark Cristel’s Racing Stable. The filly was also bred by Cristel Racing Stable.

“We didn’t get her (Sassy Miss Officer) here until August last year,” said Cristel, who trains the home bred daughter of Brother Derek. “The guy that broke her did a great job breaking her. In fact, the gallop boy asked if she was really a two-year-old last year when he got on her. She’s been really good since the beginning, but we didn’t want to push her too much since she got a late start. We took her to Oaklawn this winter and got her ready for the meet here this year.”

Sassy Miss Officer is following in the footsteps of her mother, Officer Philly, who was a solid race mare on the Chicago and Indiana circuit. She earned 11 wins in 51 career starts and just missed hitting the $200,000 earnings mark. In fact, her last career win was recorded at Indiana Downs in 2011 for Cristel.

“She (Sassy Miss Officer) is just like her mother,” said Cristel. “Her mother loved to run in the mud. In fact, she won an allowance optional claimer right out here over a muddy track.”

The win for Goncalves was the second of the day on the Wednesday card. It was also the second win in the Hoosier Breeders’ Sophomore Fillies Stakes. Goncalves won the inaugural event in 2009 aboard Trust N Seven, which still stands as the stakes record of 1:43.40.

“I really like this filly (Sassy Miss Officer) and asked to ride her back,” said Goncalves. “Her ears were going every direction when we got in the stretch. If she didn’t look around so much, I would never even have to ask her to run. She’d do it on her own.”