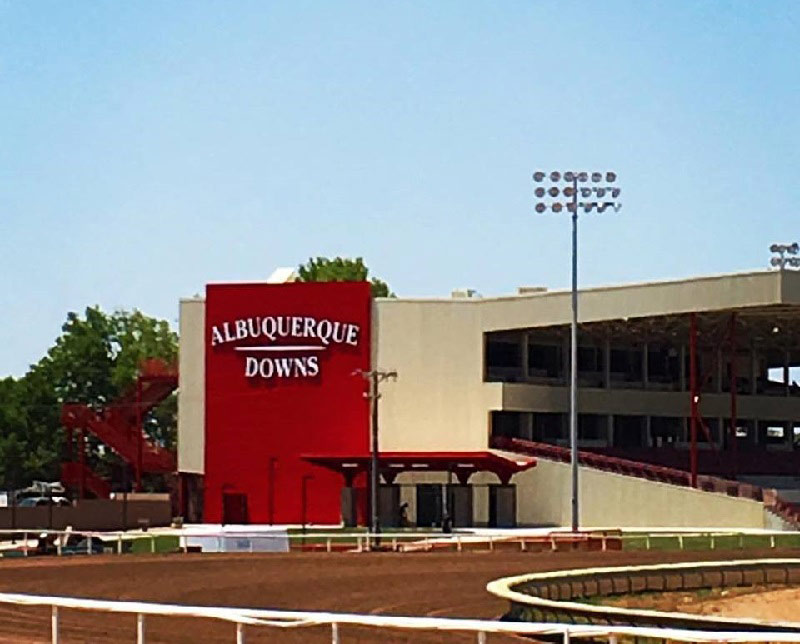 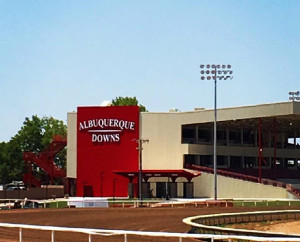 A new era will begin at Albuquerque Downs on Saturday, as the track opens its 60-date Thoroughbred and Quarter Horse meet with a 10-race program and the first night racing in New Mexico in several decades.

Post time for opening night’s first race is set for 6:05 p.m. (MDT). The featured ninth race, the 7-furlong, $60,000 O.D. McDonald Stakes (R) for New Mexico-bred Thoroughbreds, is scheduled to go off at 9:25 and will be followed by the tenth and final race at approximately 9:50.

Patrons visiting Albuquerque Downs will immediately notice a lot of changes to the facility, including a completely renovated open-air grandstand with sparkling and unobstructed views of the Sandia Mountains. All five sets of restrooms have been upgraded, as have all food and beverage stands throughout the facility. The top floor features a Turf Club with full bar and menu service (admission, $10 per person) and Jockey Club with a full bar and upscale menu service (admission by membership only).

Admission to the popular first-floor VIP room which will be open Thursdays-through-Sundays, is $5 per person.

Albuquerque Downs’ paddock area on the north end of the facility has also been renovated and features a patio area with tables and a grassy terraced viewing area. The infield tote board has been renovated with easy-to-read LED lighting and is adjoined by a 48-foot Jumbotron.

“Even though our facility is located on state property (Expo New Mexico), not one penny of state money was used on any of these improvements,” said Albuquerque Downs director of racing Don Cook.

A free concert by Grammy award-winning country music artist Rick Trevino will take place after the last race on Sunday. Trevino (www.ricktrevino.com) has charted a total of 14 singles on the Billboard Hot Country Songs charts, including three number-one singles, and he has recorded seven studio albums.

Albuquerque Downs’ opening-night O.D. McDonald Stakes has drawn a full field of 12 New Mexico-breds and is the first of 20 stakes — 12 for Thoroughbreds and eight for Quarter Horses — on Albuquerque’s 2016 racing calendar. The track’s stakes schedule will offer approximately $2.3 million in purses.

Atillas Gift, a 4-year-old gelded son of Attila’s Storm trained by Todd Fincher for owners Scott Bryant and Joe Dee Brooks, is the 4-1 morning-line favorite for the O.D. McDonald. Atillas Gift is coming off of a wire-to-wire, one-length victory in the 1-mile, $40,000 Jack Cole Stakes (R) at SunRay Park on May 9.

Atillas Gift drew post 11 and will be ridden by Norberto Arroyo Jr.

Michael Weatherly’s Not My Note, a homebred 4-year-old gelding by Fusaichi Zenon (JPN) and a two-time allowance winner during the 2015-16 Sunland Park meet, drew post 8 and will be ridden by Glen Murphy for trainer Dan Dennison. Not My Note will be making his first start since April 24, when he scored a three-quarter length win in a 5-furlong, $42,000 open-condition allowance for New Mexico-breds at Sunland.

Albuquerque Downs will offer live racing Saturday-through-Monday during its opening weekend. Post time for the first race is 1:30 on Sunday and 6:05 on Monday.

For most of its 60-day season, Albuquerque Downs will offer live night racing on Wednesdays, Fridays, and Saturdays, and day racing on Sundays. There will be special holiday racing on Monday, July 4, beginning at 6:05.

Handicappers who like large fields will be challenged by the opening-weekend programs assembled by Albuquerque Downs racing secretary Jim Collins. A total of 95 horses was entered in Saturday’s 10 races, followed by 88 on Sunday and 83 on Monday. Before late scratches, Albuquerque’s average field size will be 9.5 on Saturday, 8.8 on Sunday, and 8.3 on Monday. The average field size throughout opening weekend, before scratches, will be 8.9 horses per race.

The Downs at Albuquerque Racetrack and Casino is located in the heart of Albuquerque at Expo New Mexico, the home of the New Mexico State Fair. For more information, visit www.abqdowns.com and click on the “Racetrack” link at the top of the homepage.