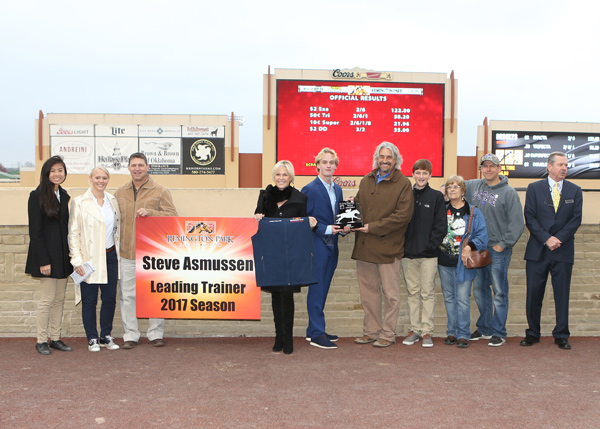 Asmussen, of Arlington, Texas, had 82 winners for the season at Remington Park. In winning his 13th Chuck Taliaferro Award as the top trainer at Remington Park, Asmussen has now won more season titles in Oklahoma City than any other trainer. He came into the 2017 season tied with Donnie Von Hemel as each had won 12 season titles here.

Federico Villafranco was second in training wins with 41.

Asmussen also led all trainers with a record for earnings with $2,252,190. No trainer had ever topped the two-million mark in earnings during a Remington Park season until this year. Asmussen’s top win came with Untrapped as he captured the Grade 3, $400,000 Oklahoma Derby in September. It was Asmussen’s first victory in the Oklahoma Derby.

Asmussen also had five training wins on Dec. 12, equaling the most on one racing program at Remington Park. The achievement tied the mark of five wins on one local card, set by Wade White in 1993.

Vazquez is the first-call rider for leading owner Danny Caldwell and became the first-call jockey for Asmussen over the second-half of the Remington Park season. The leading jockey award is named after the late Pat Steinberg who dominated the standings at Remington Park until his death in 1993. Steinberg, an Oklahoma Horse Racing Hall of Fame jockey, won nine consecutive seasonal championships in Oklahoma City prior to his passing.

Joining Vazquez with more than a million-dollars in mount earnings were Richard Eramia, David Cabrera, Luis Quinonez and Iram Diego. It is the first time five jockeys have topped the million-dollar mark in earnings in the same season at Remington Park.