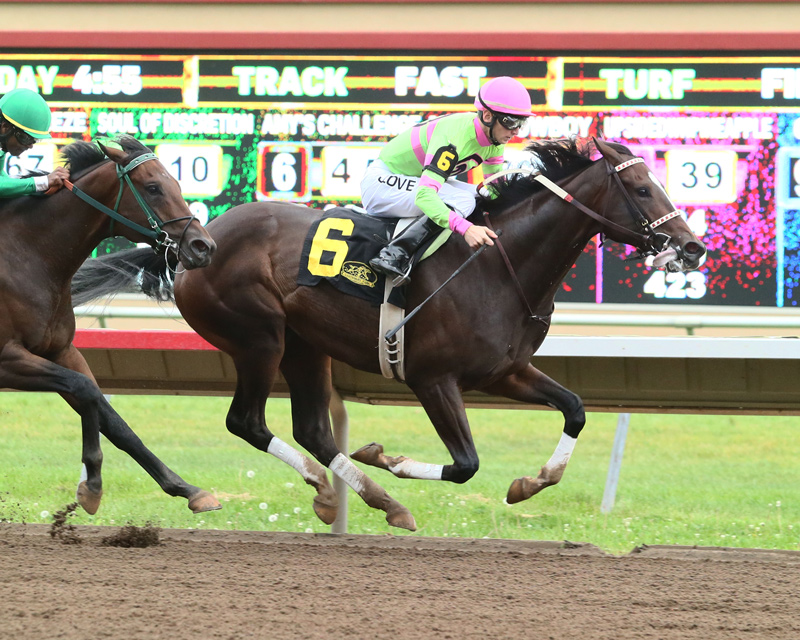 Amy’s Challenge was named Canterbury Park’s “Horse of the Meet” after winning her Aug. 6 career debut by 16 ½ lengths and the $75,000 Shakopee Juvenile Stakes Sept. 16 by three-quarters of a length in her last start. The Kentucky-bred daughter of Artie Schiller toppled males in both starts.

In preparation for the 6-furlong Dixie Belle, Amy’s Challenge recorded her first work over the Oaklawn surface Thursday morning, breezing a half-mile in :48.40 under regular rider Jareth Loveberry.

“I’d like to make it to the sprint race because it fits good,” Robertson said as he watched Amy’s Challenge in a round pen. “If I don’t run in there, I’m stuck running a mile in three weeks. I was happy getting a work in her last week.”

Following the Dixie Belle, Oaklawn’s stakes series for 3-year-old fillies continues with the $125,000 Martha Washington at a mile Feb. 10.

Amy’s Challenge breezed last week from the 3-furlong pole to the seven-eighths pole.

“I’ve worked her most of the time past the wire,” Robertson said. “She’ll probably do the same thing. If I can get another work in her this week, I’ll be happy.”

Amy’s Challenge earned a Beyer Speed Figure of 91 in her debut and 92 for the Shakopee Juvenile, both ranking among the 11 highest in the country this year for 2-year-olds through Monday.