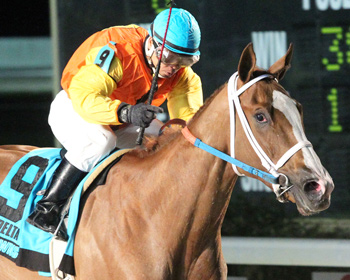 Delta Downs hosted the fourth running of the $75,000 By the Light Stakes on Friday night for 3-year-old fillies competing at seven furlongs. Jess D. George’s homered Brooke’s a Bookin, an Arkansas-bred by Arkansas stallion Jonesboro, won the race at odds of 22-1 while making her stakes debut with jockey Rico Flores in the saddle for trainer Tim Dixon.

After breaking alertly from the outside post position in a field of nine, Brooke’s a Bookin stalked the early leader Firgureitsacat through the early stages of the race. As the field rounded the second turn Flores shook the reins and his mount went after the leader. Turning for home Brooke’s a Bookin put away her rival before opening up in the stretch and defeating Another Bond Girl by 2-1/2 lengths. Go No Go rallied from far back to be third, another 4-3/4 lengths behind the runner-up.

Brooke’s a Bookin covered the distance over a sloppy track in 1:27.77.

The win by Brooke’s a Bookin marked the third of her five-race career. Each of her starts have come at Delta Downs during the current season. Friday’s tally put $45,000 into her bankroll, which now stands at $81,255.

Brook’s a Bookin rewarded her backers handsomely at the wagering windows as she returned $47 to win, $22.80 to place and $7 to show. Oklahoma-bred Another Bond Girl, winner of the Oklahoma Classics Lassie Stakes at Remington Park last year, was worth $16.20 to place and $4.80 to show. Another Oklahoma-bred and Remington stakes winner, Go No Go, paid $4 to show.