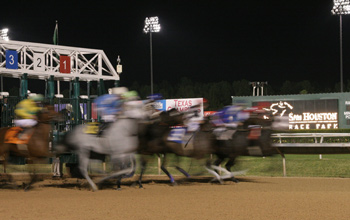 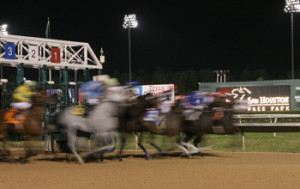 Sam Houston Race Park will kick off its 23rd live racing season on Friday, January 15. One individual who is very eager to get the 32-day Thoroughbred meet underway is jockey DeShawn Parker.

Last year was the second time Parker shipped his tack to Houston. He finished second in 2014, but began the 2015 meet in the lead and never relinquished it, winning 55 races. He was also the leading rider in money earned with $657,746 and a stellar 51% in the money statistic.

The rest of this year has been prosperous for the 45-year-old rider, with success at Turfway Park, Presque Isle, Churchill Downs, Lone Star Park and Remington Park.

He had two mounts at Belmont Park the weekend that American Pharoah made history in the Belmont Stakes. Both Parker and his agent, Billy Johnson, were on hand that Saturday afternoon for the electrifying victory of Triple Crown winner. He admitted that surrounded by 90,000 fans, he was totally engulfed in the fervor and frenzy of the memorable occasion.

“I was down by the rail, and to tell you the truth, I have never seen anything like it,” said Parker. “Everyone was so excited; total strangers were high-fiving and hugging each other. It was such a thrill to be there in person.”

“That was the hottest I have ever been,” said Parker of riding in the Texas heat.

He completed 2015 with his first foray to Remington Park in Oklahoma City. Parker won 37 races and was in the money 34% throughout the meet.

“I enjoyed both Lone Star and Remington and made some good connections there,” Parker noted.

The well-traveled veteran has ridden 30,485 Thoroughbreds, according to Equibase, winning 4,925 races to date. He was the 7th leading jockey by wins in North America last year, with top ten rankings for the past eight years. His health is good, and despite spending considerable time away from his wife and two sons, who live in East Liverpool, Ohio, Parker can’t envision retirement yet.

“Winning 5,000 races is definitely a goal,” said Parker. “I’m feeling good and had a nice three week break after Remington. I worked my first horse in Houston on Thursday and it felt great to be back in the saddle.”

He will ride for a number of horsemen, including Shea Stuart, Steve Asmussen, Karl Broberg and Bret Calhoun, who tabbed him to ride Mr. N Saturday night in the $75,000 Big Drama Stakes at Delta Downs.

The Houston Racing Festival will return for its fourth running on Saturday, January 30. The richest day in Texas Thoroughbred racing will feature four stakes, including the Grade 3, $400,000 Houston Ladies Classic, the Grade 3, $200,000 John B. Connally Turf Cup, which will now be run at 1 1/2 miles, the $75,000 Frontier Utilities Turf Sprint and the $50,000 Space City Stakes.  Proceeds from the Houston Racing Festival will once again benefit the Houston affiliate of the Susan G. Komen foundation.

Stakes races will continue every weekend during the remainder of meet with the Sam Houston Sprint Cup, Houston Distaff, and Houston Turf Stakes on  February 13; the Clarence Scharbauer Texas Stallions Stakes Series on February 20 featuring the $75,000 Two Altazano Stakes and the $75,000 Jim’s Orbit Stakes.  The Maxxam Gold Cup Racing Festival will take place February 27 and will feature the $100,000 Maxxam Gold Cup, the $50,000 Jersey Lilly Turf Stakes, the $50,000 Bucharest Turf Sprint, and the $50,000 Texas Heritage Stakes.