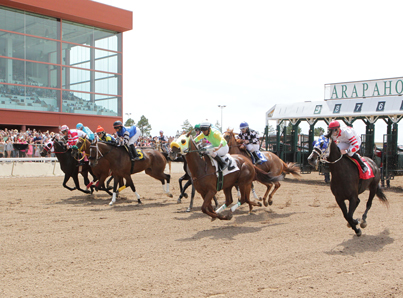 Arapahoe Park will conduct 39 days of live horse racing in Aurora, Colorado during its 2017 season this summer from May 19 to August 13. The track, which opened in 1984 and has raced every summer since 1992, will feature racing on Fridays, Saturdays, and Sundays, with nine races each day beginning at 1 p.m.

Arapahoe Park’s opening weekend of racing in 2017 will coincide with the Preakness Stakes, the second jewel of the Triple Crown, from Pimlico Race Course in Baltimore on Saturday, May 20. There will be a special racing program on Memorial Day, May 29, and during the holiday weekend racing will take place on Monday instead of Friday.

Other marquee days during the 2017 season include Saturday, June 17, for the Heritage Ride when Arapahoe Park will partner with the Colorado Horse Council to give fans chance the chance to bring their horses and ride on the racetrack. Sunday, June 18, will feature a Father’s Day buffet and festivities that have traditionally drawn one of the biggest crowds each season. The track’s top races, the Gold Rush Futurity for Thoroughbreds and the Arapahoe Futurity (formerly Mile High Futurity) for Quarter Horses, are scheduled to put an exclamation point to the meet on the final day of the season, Sunday, August 13.

More information about the stakes schedule, condition book, and stall applications will be available by the end of February on the racetrack’s website, www.mihiracing.com. Arapahoe Park will have a new racing secretary in 2017, Hank Demoney, who has most recently been a steward at Arapahoe Park and has seven decades of experience as a general manager, racing secretary, clerk of scales, and other areas of racing management in Colorado, Arizona, New Mexico, and other states.

“I want to keep the races competitive, and hopefully we can get a few more horses and have bigger field sizes,” Demoney said.