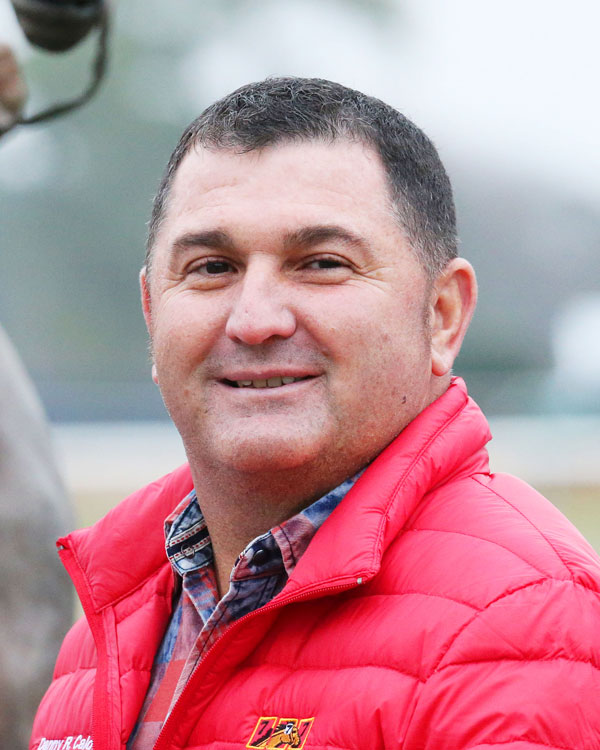 Danny Caldwell said he’s been battling the flu in recent weeks, but Oaklawn’s three-time defending leading owner isn’t sick of visiting the winner’s circle. Caldwell is off to a fast start at Oaklawn, recording meet highs for starts (24), victories (six) and purse earnings ($261,782) through the first eight days of racing

Highlighting the early flurry was a victory by Domain’s Rap in the $125,000 Fifth Season Stakes for older horses opening day, Jan. 13. The 9-year-old gelding represented the first Oaklawn stakes victory for Caldwell, who started his first horse in Hot Springs in 2008, according to Equibase, racing’s official data gathering organization.

“I claimed for the first part of this meet,” said Caldwell, 51, who had his first Thoroughbred victory in 2007. “I went to Kentucky and got some better horses. It’s all worked out. You love when a plan comes together. Had them fresh and ready to run.”

But Caldwell has been a force in high-end races, too. In addition to Domain’s Rap, Caldwell sent out another opening-day winner – his first maiden special weights score at Oaklawn – in P C Cowboy, a 3-year-old Archarcharch colt who was making his first start since being claimed for $20,000 out of his Dec. 11 career debut at Remington Park.

Previously with the high-profile connections of Todd Pletcher (trainer) and Stonestreet Stables LLC (owner), Boalt Hall was a $360,000 a Keeneland September Yearling Sale purchase. The colt was a career debut winner last January at Gulfstream Park.

“Stonestreet was selling a bunch of their horses; they just culled some out,” Caldwell said. “The horse had run fourth in an allowance race at Gulfstream and had been training really good.”

Caldwell’s sixth victory of the meet came in a $25,000 claiming event Sunday with Ol Sanish, the owner’s 82nd overall at Oaklawn, according to Equibase.

Leaning heavily on the claim box, Caldwell won 24 races to win his first Oaklawn owner’s title in 2014, 18 races in 2015 and 22 races last year. Caldwell said of the 30 or so horses he now has in training at Oaklawn, only about a half-dozen were with him at last year’s meet.

Caldwell is working on a fourth consecutive triple crown – leading owner on his annual circuit of Oaklawn, Prairie Meadows and Remington Park.

“I’ve reloaded,” Caldwell said. “I had to go and reload. It’s tough to go to each track to win, because you lose your conditions when you’re fortunate enough to win races. I’ve got a few horses at Remington Park, but I had to go out and search the country, basically.”

Caldwell, who lives in Poteau, Okla., about 125 miles northwest of Hot Springs, has raised some of his stock, but said he’s starting to “venture out” and buy more at public auction.

Claimed for $10,000 in November 2015 at Remington Park, Domain’s Rap won four consecutive races for Caldwell before finishing second in the $350,000 Razorback Handicap (G3) last year at Oaklawn. Caldwell said Domain’s Rap is a candidate for the Feb. 20 Razorback (G3), worth a record $500,000 this year.

Federico Villafranco trains privately for Caldwell, who has ranked in the top 10 nationally in victories the last three years and has 579 in his career. He won 115 races last year and set a career high for purse earnings ($2,381,185).