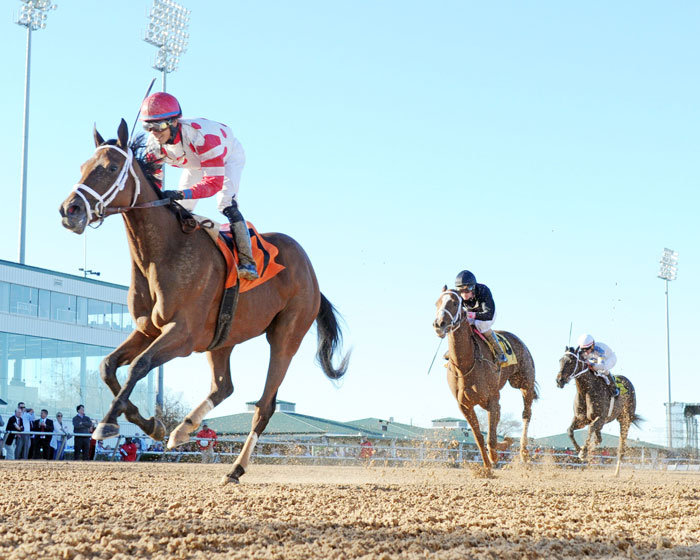 It was a superb afternoon of racing at Sam Houston Race Park with exhilarating performances by Unbridled Mo in the Grade 3, $400,000 Houston Ladies Classic and another win for trainer Mike Maker in the Grade 3, $200,000 Connally Turf Cup. It was also a standout day for jockey Jose Ortiz, who posted three stakes wins on the afternoon card.

Once again, a quality field of fillies and mares competed in the Grade 3, $400,000 Houston Ladies Classic. Now in its fifth running, the Houston Ladies Classic anchors The Houston Racing Festival, which also includes the Grade 3, $200,000 John B. Connally Turf Cup, the $75,000 Frontier Utilities Turf Sprint, the $50,000 Houston Distaff and the $50,000 Space City Stakes.

Seven-time Eclipse Award winning conditioner Todd Pletcher shipped in Red Oak Stable’s Unbridled Mo and felt confident that she would rebound from her off the board finish in the Comely at Aqueduct when she had her five race win streak snapped.

The 4-year-old filly by Uncle Mo owned and bred by Red Oak Stable looked sensational in the paddock and delivered a solid performance under jockey Jose Ortiz. Unpressured early, she settled off the pace and rallied at the top of the stretch. She crossed the wire of the mile and one-sixteenth feature in 1.42.89.

“I’m very happy,” said owner John Brunetti. “We had the best horse, best rider and best trainer. I can’t wait to get her into the breeding shed, but we’ve got more work to do. My son bred her and this is as good as it gets!”

“She just didn’t handle the inner dirt track at Aqueduct,” said Rick Sacco, who saddled Unbridled Mo for Pletcher. “She’s a great big filly and this was a very exciting win for the Brunetti family. Todd’s a world-class trainer. We’ll go home to Florida and think about her next start.”

“Todd told me to warm her up good and put her in a good position,” said the winning rider. “She’s a big filly and when she hit her big stride, I felt I had a good chance. But when I’m a Chatterbox came to us, I got after my filly left-handed and we were able to win.”

The morning line favoritism went to Grade 1 winner, I’m a Chatterbox, bred and owned by Mr. and Mrs. Fletcher Gray.

Jones has won two editions of the Houston Ladies Classic with two Fox Hill Farms, Inc. homebreds; first with Joyful Victory in its inaugural running in 2013, and then with Cassatt in 2015. Jones, 60, has been a strong supporter of Sam Houston Race Park, and was very gracious in defeat.

“She was a little wide, but still ran a good race,” added Jones. “We got what we needed out of the race and that’s horseracing.”

Then, with a smile, Jones added “Todd always beats me!”

Unbridled Mo earned $220,000 this afternoon and left the gates as the third-betting choice, paying $11.20. Family Tree, Steel Cut, Another Bond Girl and Danzatrice completed the order of finish. Tiffany Case was scratched from the race.

The Houston Ladies Classic was the first stakes of the Penn Gaming Racing Challenge. The national program, now in its third year, will incorporate over 20 stakes races in 2017 worth over $5.5 million.

Bred by Kenneth and Sarah Ramsey, Bigger Picture beat a quality field in the Grade 3 Red Smith last November at Aqueduct. Maker gave the mount to Jose Ortiz, patiently stalked a tepid early pace and guided the chestnut gelding to the wire in 2:32.24. The Ramsey’s Oscar Nominated ran second under Florent Geroux by a margin of 1 ¼ lengths followed by Michael M. Hui’s Greengrassofyoming

“The horse continued to train well and Jose had a great trip,” said Maker of Bigger Picture. “The rail opened up and he took advantage of it. “Greengrassofyoming was compromised by the slow pace and Oscar Nominated ran a credible race in his first start a 4-year-old.”

Jose Ortiz was pleased with the firm Connally Turf Course and the effort of his mount.

“Going pretty slow in the beginning. I knew I had plenty of horse left,” said Ortiz. “The first time we crossed the wire when he made the lead, I knew we had it.”

Hay Dakota, the winner of the Grade 3 Commonwealth Turf in November at Churchill Downs, ran fourth.

This was the fifth Connally victory for Maker, who began his career as an assistant to Hall of Fame conditioner D. Wayne Lukas, has a solid history in the Connally Turf Cup, winning four of the last five editions of the stakes with Papa Bodie in 2012; Admiral Kitten in 2014; Coalport in 2015 and last year’s running with Skychai Racing LLC’s Da Big Hoss.

Trainer Mike Maker made the trip to Houston on Sunday and saddled two entrants in the Frontier Utilities. Purely Mocha, owned by Sarah and Kenneth Ramsey is a stakes-placed son of Half Ours under Jose Ortiz who found room on the rail and got the victory.

William Stiritz’s Hogy made his 40th career start, and Sam Houston debut, under Florent Geroux and closed well, but could not catch the winner.

Ortiz made the most of his first trip to Sam Houston Race Park, winning three stakes on the day.

“He broke great and I was able to save ground,” said Ortiz. I got clear and held off the closer.” I thank Mike and the Ramseys for giving me this opportunity.”

Maker was pleased with the effort from the 8-year-old, who covered five furlongs in :57.64 over the firm turf course.

“He put himself a little closer today,” stated Maker. “It helped that the rail opened up and he was able to save ground. Shadow Rock ran a good one today as well.”

Partly Mocha rewarded his supporters with a nice win payout of $14.40 and earned $45,000 for the victory. Maker’s other starter, Shadow Rock, winner of ten turf sprints to date, was third under Robby Albarado, followed by longshot Mascherato.

Hip Hop N Jazz who had a nice turf win under Florent Geroux one month ago, won her first stakes race with flying colors. The 5-year-old Speightown mare is trained by Tom Proctor for owner Heider Family Stables LLC.

“The first time I rode her at Churchill, she was completely lost,” said Geroux. “In her last race, she went to the front and won easily. I was pretty confident she could do the same today.”

“She’s really come along and has really started to figure it out,” said Mel Williams, assistant to Proctor. “This was my first time in Texas; it’s pretty cool.”

Geroux had a tough start to the day arriving without his tack.

“My luggage was lost coming from New Orleans, so I came here pretty much naked,” said Geroux. Robby Albarado and the other riders lent me what I needed. “The day worked out well; all my horses ran well, and I was happy to win the last one.”

Hip Hop N Jazz ($5.20) crossed the wire in a final time of 1.43.93, with 20-1 Stormquility under Curtis Kimes. There was a dead heat for third between Susie Bee and Artistic License.