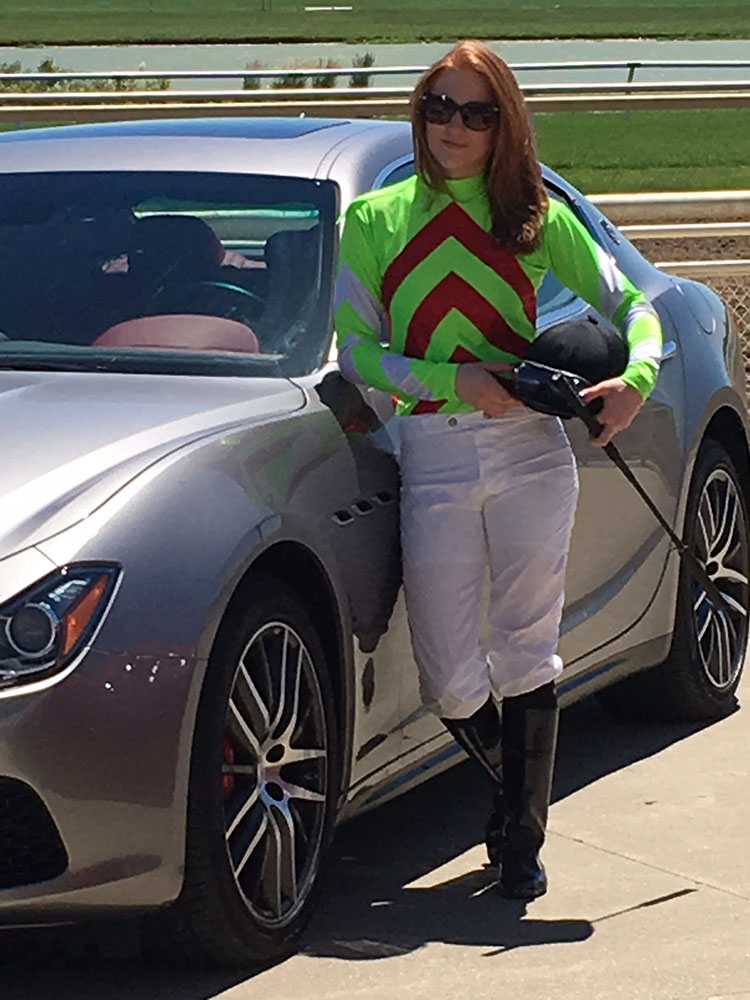 Jockeys aren’t always given a warm welcome from local horsemen when arriving to a new circuit, but that certainly wasn’t the case for Kaylia Albright. Born and raised in Jonestown, Pennsylvania with her mother and grandparents, she initially developed her love of horses in high school through rodeo and barrel racing.

But Thoroughbreds run deep in the Albright pedigree. Both mother and father were jockeys. Her mother, Amy Albright, and uncle, George Albright, are both trainers at Penn National. Her grandmother, who passed just last year, and grandfather were trainers as well.

After getting dropped by a few unruly Thoroughbreds as a teenager, she had written off the breed as a potential profession. She was very comfortable barrel racing and galloping for her mother at the farm. Her persuasive uncle talked her into helping him break babies and then galloping horses at the racetrack. It was three years later at the age of 21 that she finally decided to make the transition from exercise rider to jockey.

Her career took off immediately in 2012, as her first mount was also a winning one on Friday, July 13. Riding primarily at Penn National, she piloted approximately 145 winners during the first year of her apprenticeship which concluded in early September of 2013. According to Equibase, she rode 63 winners in 2012 and earned more than $1.19 million in earnings. The best year of her career (so far), came in 2013 with 100 wins and $1.92 million in earnings.

It was a major decision to leave the comforts of home and the circuit she was used to, but Albright made the decision to test new waters in 2016.

“I just wanted to do well enough to make it worth the move,” said Albright, “worth being away from my farm, my family and my horses. And I wanted to get a good start, because if you don’t get off to a good start, then people don’t really give you a shot.”

It’s not always easy being the new kid in town. Albright has certainly made a name for herself and has found herself posting double wins on several occasions throughout the meet.

“Everyone has been very welcoming and very nice,” said Albright, “that definitely made the transition easier.”

With currently 14 races won, Albright is finding herself in the top 13 at a rate of 26 percent for hitting the board (top three finishers). She is represented by one of the top jockey agents in Don Cespedes, who also represents leading jockey Fernando De La Cruz.

Albright has also been very receptive to numerous promotional events during her time in Indiana. She was one of four Indiana Grand jockeys featured on a Maserati car ad fusing horseracing and horsepower together and was also featured on WISH TV’s Indy Style during Indiana Derby Week.