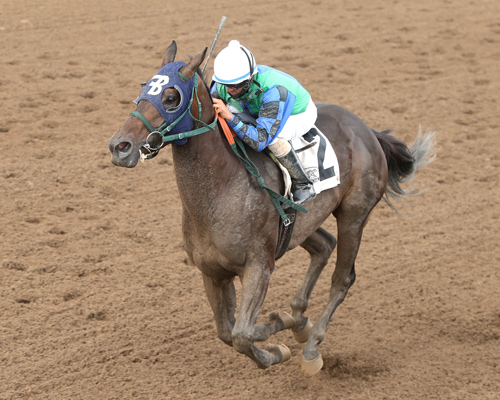 When Pensador was led into the winner’s circle after the 28th running of the $85,000 Minnesota Derby on Saturday, it was not the first time trainer Francisco Bravo and owner Dale Schenian had won the most prestigious race for Minnesota-bred 3-year-olds. They teamed up last season to win the derby with Hold for More and in 2000 with Crocrock.

Just minutes prior to Pensador’s 1 1/4-length victory over maiden Smooth Stroke, Bravo’s other Minnesota Derby entrant, Smooth Chiraz, who was heavily favored by the crowd of 16,358, acted up in the starting gate, broke loose, and was scratched.

“It was very disappointing but we had a back-up plan,” Bravo said. “I told Dale that the longer the race the better for Pensador and today we were proved to be right.”

Pensador tracked the pace setters Smooth Stroke and Shooters Alley on the backstretch and appeared to be rank before taking control at the top of the stretch.

“He was aggressive,” winning jockey Orlando Mojica said. “He wanted to go so bad. I just got him to relax and get outside and then it was over.”

Blazing Angel was bred by Todd and Stacy Nelson and is sired by Angliana. Her earnings now stand at $71,411 from 11 starts.