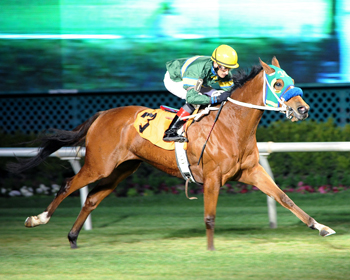 Saturday night’s feature at Sam Houston Race Park offered a return engagement of the very compelling rivalry between Texas-bred mares Smiles Golden Song and Vilao. The two turf stakes winners faced off for the fourth time in the $50,000 Tomball Stakes, but Wampas Kitty, at odds of 10-1, posted the upset.

Wampas Kitty, owned by Craig Harrison of Terrell, Texas, ran third in the $50,000 Star of Texas on the main track January 18. Trainer Clifford Dodson had not tested her on the turf since December 8, 2012, but decided to try her again this evening. Under jockey Alfredo Contreras, the 6-year-old mare by Texas stallion Captain Countdown sat off the pace set by Vilao and Mescaleress and made her move at the top of the stretch. She closed gamely and crossed the wire of the mile and one-sixteenth stakes over a firm Connally turf course in 1:44.37.

“In her last turf races, she tended to be too far back, so we wanted to make sure she was in striking distance when we hit the final turn,” said Dodson. “Alfredo did a great job; she ran a very good race.”

Wampas Kitty, who was bred Craig and Gwen Harrison, is by Texas-bred Captain Countown, who stands at Double S Thoroughbreds in Poynor. Captain Countdown, by Relaunch, won 11 of 35 career starts and earned $384,155. He won or placed in 14 stakes while racing through his 6-year-old season. Wampas Kitty’s dam is the Texas-bred Ms. Winfrey, a daughter of former all-time leading Texas stallion and Kentucky Derby winner Sunny’s Halo.

“I wasn’t sure how she would handle the turf, so I just wanted to be patient,” said Contreras. “When we turned for home, I asked her and she responded.”

Smiles Golden Song, a daughter of Valor Farm stallion My Golden Song owned by Sylvia Baird, was sent off as the favorite based on back-to-back stakes wins in the Fiesta Mile on the Retama Park turf course and an impressive score here on opening night in the San Jacinto Stakes. With apprentice David Cabrera in the irons, Smiles Golden Song mounted her bid, but could not catch the winner.

Lynn Carol Ellen’s Mescaleress, by Marquetry, ran third, followed by Vilao, who was the runner-up in last year’s edition of the Tomball Stakes.

Wampas Kitty returned $23.20 to her supporters and earned $30,000 for the victory, which was the first stakes win for both Dodson and Contreras.

“It was awesome to win my first stakes,” added Dodson. “It couldn’t have happened for better connections.”

Dodson indicated that Wampas Kitty might make her next start in the $50,000 Jersey Lilly Stakes here on March 1.