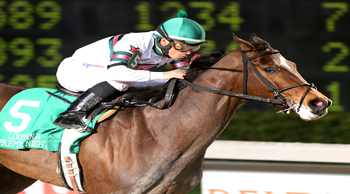 Brittlyn Stable Inc.’s Sunbean used an eye-catching move to gain the lead and drive on to victory in Saturday night’s $200,000 Louisiana Premier Night Championship at Delta Downs. The big race was the featured event on another edition of Louisiana Premier Night, which included 10 stakes races for Louisiana-bred horses and more than $1 million in purse money.

Sunbean, who was ridden by Richard Eramia, stalked the pace in the 1-1/16 mile event before picking off the frontrunners and eventually the pacesetter Hit the Road Lee turning for home. When he reached the top of the homestretch, he began to get clear before hitting the finish line four lengths in front of Hit the Road Lee, who held on to second. Populist Politics rallied from well behind to be third, another 3-3/4 lengths behind the top pair.

Saddled by talented young trainer Ron Faucheux, Sunbean finished the distance over a fast track in 1:44.04. That time broke the stakes record of 1:44.15 set by the great Star Guitar when he won the third of his four consecutive Louisiana Premier Night Championships in 2011. Star Guitar was also campaigned by Brittlyn Stable Inc. (Evelyn Benoit) and retired as the all-time leading Louisiana-bred earning Thoroughbred with better than $1.7 million in his bankroll.

Sunbean is a 4-year-old gelding by Brahms, out of the Malagra mare X Strawdnair. He was bred in Louisiana by his owner.

In other action on Louisiana Premier Night it was Cantrell Family Partnership’s Tensas Harbor winning the $150,000 LAPN Distaff with jockey Mark Guidry in the saddle. Tensas Harbor is trained by J. Keith Desormeaux.

This year’s $125,000 LAPN Prince for 3-year-olds was annexed by Henry Ray Dunn’s Ide Be Cool, who kept his record perfect at five-for-five while winning under jockey Chris Rosier.

Closing Report was impressive while taking the $125,000 LAPN Starlet for 3-year-old fillies. The daughter of Closing Argument was ridden to victory by Rosie Napravnik, who accepted the mount from trainer W. Bret Calhoun. Closing Report is owned by Stephen R. Brown.

The speedsters were out in force in the $100,000 LAPN Sprint, which was won by the ultra-fast Heitai. The Karl Broberg trainee was guided to victory by jockey Diego Saenz and he set a new five-furlong track record of 56.69. Heitai is owned by Rowell Enterprises Inc. (Frank & Barbara Rowell).

Sittin At the Bar won her second consecutive race at Delta Downs in the $100,000 LAPN Matron for older fillies and mares. Sittin At the Bar was ridden by Colby Hernandez and is trained by Brett Brinkman. The daughter of Into Mischief is owned by P. Dale Ladner.

Maggi Moss’s Little Face was victorious in the $65,000 LAPN Ladies Starter with jockey Gerard Melancon in the saddle. Little Face is trained by Tom Amoss.

The $65,000 LAPN Gentlemen Starter was won by Awesome Bandit, who was ridden to victory by Emanuel Nieves for trainer Dale White, Sr. Awesome Bandit is owned by Dale R. White and Carlton J. Foster.

Fifty Acres rolled to a win in the $50,000 LAPN Ragin Cajun Starter with jockey Diego Saenz aboard. Fifty Acres is trained by Karl Broberg and is owned by Broberg and Eduardo Ramirez.

And finally it was Queens Walk taking the $50,000 LAPN Bon Temps Starter for fillies and mares. Queens Walk was piloted by Richard Eramia who accepted the mount from trainer Karl Broberg. Queens Walk is owned by End Zone Athletics, Inc.

Delta Downs’s season continues on Wednesday with a 10-race program that gets underway at 5:45 pm CST.