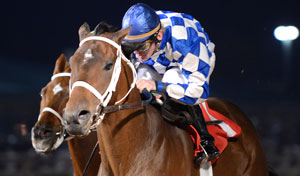 The stars of trainer Bret Calhoun’s barn won three of the four Texas Champions races on Saturday night at Sam Houston Race Park, and all three were sired by stallions from Valor Farm near Pilot Point, Texas, and piloted by jockey Cliff Berry. Friday night was devoted to fillies and mares, and accredited Texas-bred colts and geldings were featured on the Saturday evening Texas Champions Weekend card. Progeny of Valor Farm stallions won two of the three stakes on Friday night for a total of five wins from the seven races, plus four other Valor-sired runners hit the board, including at least one in every stakes.

The marquee race on Saturday was the $100,000 Star of Texas, and Coyote Legend defended his title in masterful style, leading from gate to wire. Owned and bred by Clarence Scharbauer Jr., who also owns Valor Farm, the 6-year-old son of former Valor Farm stallion Gold Legend commanded from the opening bell in the mile and one-sixteenth main track stakes.

“He ran a very good race,” said Calhoun from New Orleans, where he oversees a string of horses at Fair Grounds. “We knew the five horse (Cat’s Classy Rider) had speed and thought he would go and Coyote Legend could stalk him. But, that did not happen, so Cliff just let him go and did what he was supposed to do.”

This was the third consecutive victory in the Star of Texas for Calhoun, who won in 2011 with Taptam and last year with Coyote Legend.

Just as he did last year, veteran rider Cliff Berry was in control from the break, guiding Coyote Legend through the first quarter mile in :24.72, saving ground on the rail through the early stages of the race.

“He can run fast and run a long way,” commented Berry. “He broke well, and relaxed for me; that was the key.”

“He’s a special horse,” said Jay Severs, the longtime assistant for trainer Calhoun, who handled the saddling duties this evening.

Coyote Legend ($3.00) completed the mile and one-sixteenth Star of Texas in 1:45.74. He earned $60,000, increasing his career bankroll to $670,979. Cat’s Classy Rider under rider Chris Landeros ran second and Halifax Flyer held on for third.

The striking 3-year-old gray son of Valor Farm stallion Wimbledon returned to the winner’s circle for the first time since capturing the TTA Sales Futurity last June at Lone Star Park. Berry kept him close to the lead in the early going, and he finished strongly over Breathethefire and Mula Run.

“He was closer to the pace than we expected,” said Calhoun. “But when he got clear, he was tons the best.”

Berry, who has ridden the gelding in three of his nine starts, concurred.

“He’s got a big stride,” said Berry. “His race tonight just shows you how much class he has.”

Ken Carson, general manager of Valor Farm, noted the pride that Scharbauer has in developing stakes winners in Texas.

“We’ve had some wonderful mares for years,” said Carson. “Worldventurer’s dam’s pedigree goes back to Alysheba. Clarence has been a great benefactor to Texas racing.”

Owned by Wimp Free Racing Stable, Gold Element settled off the pace in the six-furlong sprint, but rallied past Canigotoo and defending champion Solar Charge. He covered six furlongs in 1:09.93, and improved his record at Sam Houston to four wins from five starts.

Calhoun gave credit to Berry for superior rides on each of the three stakes winners.

“Cliff has been with us for many years,” said Calhoun.  “He is riding at Oaklawn Park, but agreed to come to Houston when we asked. My owners really appreciate his loyalty, and our association with Cliff means a great deal.”

Gold Element, who was bred by John Goodman, is a son of former Valor Farm stallion Gold Legend.

Skip a Smile, honored as 2011 Texas Horse of the Year and winner of the Richard King two years ago, was an impressive winner. Trained by Steve Asmussen and ridden by Glen Murphy, the 6-year-old son of Skip Away showed a tremendous closing kick, surging home to win by 6 1/2 lengths.

Tonight he picked up his tenth win from 26 starts and increased his career bankroll to $434,630.

Rose Mary Chandler, his owner and breeder, was a proud recipient of the trophy and acknowledged her multiple-stakes winner’s performance over the Connally Turf course.

“He does enjoy the turf,” said Chandler. “It’s a true honor to be here; we work very hard, as do all the people in the race. We are proud to run our horses in Texas.”

Murphy was the leading rider in Houston last year, and praised the effort of Skip a Smile.

“He’s an incredible horse and made it look easy,” said Murphy. “He relaxed behind the horses and made up three lengths when I smooched at him. Winning a stakes on Texas Champions weekend means the world to me.”

Skip A Smile ($3.80) covered the mile and one-eighth on a firm turf course in a final time of 1:51.24. Longshot Spiderman Ridge closed for second and Fly The Red Eye completed the trifecta.