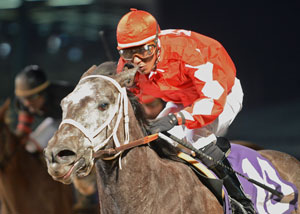 It was “Ladies Night” on the first night of Texas Champions Weekend and opening day of the Thoroughbred meet at Sam Houston Race Park on Friday. The 10-race card featured three stakes for accredited Texas-bred took with full fields and dominating performances in the $50,000 Bara Lass for 3-year-old fillies; the $50,000 Yellow Rose for 4-year-olds and up and the 50,000 San Jacinto Stakes with fillies and mares competing on the Connally Turf Course.

Gerardo Mora gave his filly a well-timed ride, as odds-on favorite Esscalator went to the lead, completing the first quarter in :23.51 and the half-mile in :47.61. Platinum Song took the lead at the top of the stretch and held off a nice closing effort from Molly’s Honour, crossing the wire in a final time of 1:25.96.

This was just the second stakes win in 18 years for owner Scott Brown of New Braunfels, Texas.

“She is a wonderful filly, but I owe this win to our great trainer, Danny Pish,” said the elated owner.

Cowgirl N Up returned to action off a seven-month layoff in fine form. Owned and trained by Caroline Dodwell and bred in the name of her and her late husband Ed’s Diamond D Ranch, the 4-year-old filly had captured the 2012 Bara Lass, and added yet another stakes win this evening.

“My stepson handles the training and said she was ready,” said Dodwell. “I have all the faith in the world in him.”

It was an emotional celebration as Dodwell paid tribute to her husband, Ed, who passed away in June.

“This filly was one of Ed’s favorites,” said Dodwell.

Jockey Larry Taylor has been the regular rider about Cowgirl N Up and dueled briefly with Two Altazano Stakes winner Color Code, before drawing clear. She covered six furlongs in 1:10.89 and returned $9.40 for the win.

She’s great on the dirt and turf,” said Taylor. “I feel very fortunate to be able to ride her.”

Cowgirl N Up was the second stakes winner of the night for My Golden Song, who stands at Clarence Scharbauer’s Valor Farm near Pilot Point, Texas.

Contucky Dirt rallied for second under Gerardo Mora and Color Code was third.

Vilao, owned by Rugged Cross Racing and bred by Richard Rowan, closed with authority under jockey Ramon Luna and drew off to a three-length victory. She showed her closing kick in a second-place finish last month in the Fiesta Mile at Retama Park. Tonight she turned the tables on Fiesta Mile winner Smiles Golden Song, crossing the wire over the firm turf in 1:45.61.

It was the first stakes for her trainer Rebecca Baker, who has run horses at Calder Race Course in Florida and Mountaineer Park in West Virginia. Vilao won three races for her this year before she decided to ship her to Texas to compete in the Yellow Rose.

“It was a rush trip and we only had two weeks to get her ready,” said Baker. “We thought she might come up a little short, but she gave her all.”

Luna was pleased with the effort from the 4-year-old daughter of
Grave Digger.

“You can put her wherever you want her and she always has an extra gear,” said Luna.

For the second year in a row, Patty’s Pride ran second, followed by Smiles Golden Song. Vilao returned $14.60 as the fourth choice in the wagering.

Texas Champions Weekend continues on Saturday evening with four stakes. The card will include the $50,000 Groovy Stakes, $50,000 Richard King Stakes, $50,000 Spirit of Texas and the $100,000 Star of Texas Stakes. Defending champion, Coyote Legend is the 2-1 morning-line favorite in the mile and one-sixteenth Star of Texas.