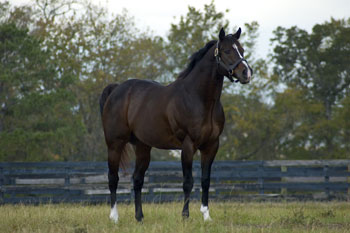 Valid Expectations, the dominant stallion in Texas over the past decade, recently hit another milestone as he became the Lone Star State’s all-time leading stallion by progeny earnings. The 20-year-old son of Valid Appeal has sired the earners of $29.7 million with a total of 394 winners and 43 stakes winners from 12 crops to race. Valid Expectations, who stands at William S. Farish’s Lane’s End Texas near Hempstead, surpassed the late 1983 Kentucky Derby winner and former Texas stallion Sunny’s Halo, who sired the earners of $29.5 million with 20 crops to race.

Valid Expectations was the first major stakes winner for trainer Steve Asmussen, and in the colors of Texas-based Ackerley Brothers Farm he compiled a record of 27-12-3-6 with earnings of $596,092 and seven stakes victories, including the Grade 3 Derby Trial at Churchill Downs. He originally retired to stand in Florida for two seasons and then was relocated to Lane’s End Texas by a group comprised primarily of Texans. Some of his top runners include Group 1-winning millionaire Saratoga County, Grade 2 winner The Daddy and Texas Horse of the Year Leaving on My Mind.