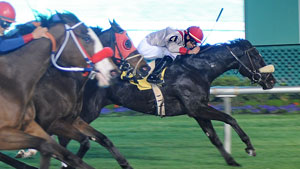 Manyriverstocross made the most of her Sam Houston Race Park debut in the Saturday evening feature, the $50,000 Tomball Stakes. The 4-year-old filly defeated an accomplished field of accredited Texas-bred fillies and mares in the turf race, resulting in the first stakes win of her career.

Owned and bred by Robert Morgan Evans and trained by Bart Evans, the daughter of Minister Eric has now won three of her six career starts. She had captured a turf allowance last October at Remington Park and finished fourth in her only other stakes appearance, the Fiesta Mile on December 8 at Retama Park.

This evening, she united with jockey Gerardo Mora, the second-leading rider at Sam Houston Race Park. He was content to stay close to the early pace set by Sera’s Tunnel but saved ground on the rail and closed with a final kick to win the 1 1/16-mile stakes over a firm Connally turf course.

“The filly ran a big race for me,” said Mora.

Manyriverstocross was saddled by Jody Wright, who was a jockey at Sam Houston Race Park and has served as assistant to Evans since last March.

“What a great race,” said Wright, who gallops the filly for Evans. “She’s my baby. We always thought she would be this kind of horse; tonight she did us proud.”

She was lightly raced due to a spider bite as a 2-year-old which kept her out of training for close to one year.

“Her hock swelled up and she was off for a year,” added Wright. “Bart took his time with her and is so patient with all his horses.”

The field included five fillies and mares from the $50,000 San Jacinto Stakes on opening night of the Sam Houston Race Park season. Vilao was much the best that evening and trainer Rebecca Baker was hoping for a big effort from the 4-year-old daughter of Grave Digger. Rider Ramon Luna had the return call was closing in the final strides, but had to settle for second.

“They put me over the rail from the get go,” said Luna. “I had to go the long way around and couldn’t get there.”

Sera’s Tunnel ran third, followed by Patty’s Pride, Smiles Golden Song, Im a Bear, Touched by Faith and Sapphirendiamonds. Dismissed by the betting public, Manyriverstocross returned $27.20 for the win, crossing the wire in 1:44.56.

A total of 64 dogs headed to the starting gate in trials with eight qualifiers returning for the final. The winner, Ricky Bobby, showed tremendous poise and determination in his first competition. The 5-year-old dachshund is owned by Jeff Michael of Houston.

“I figured he’d be good since he loves to chase squirrels,” said his proud owner.