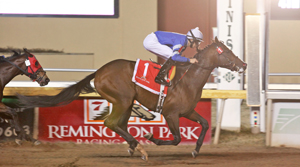 Eligible 2-year-old Oklahoma-breds were featured in a pair of divisional stakes races Friday at Remington Park. Both events went to upset winners.

The $55,000 Oklahoma Stallions Stakes, with a division for colts & geldings and another for fillies, were contested at six furlongs. Chuck pulled a mild upset in the race for males, while the filly division was taken by 25-1 longshot Rah Rah Rachel who broke her maiden with the stakes score.

Chuck, owned by Wayne Stockseth of Corpus Christi, Texas, and trained by Don Von Hemel, managed to run down the pace-setting Shirley Elizabeth in the stretch before drawing away to win by 1 1/4 lengths. Jockey Lindey Wade had the ride on Chuck who won for the second time in three career attempts, all this fall at Remington Park.

Shirley Elizabeth went to the front from the starting gate and entertained fractions of :22.70 for a quarter-mile and :46.12 for the half-mile. Tracked through the half-mile by Chuck, Wade set him down for the stretch run where he caught Shirley Elizabeth in the final 100 yards, crossing the finish in 1:11.32 over the fast track.

A colt by Evansville Slew from the Marquetry mare Holdthebaby, Chuck won for the second time in three career starts, all at Remington Park this fall. Bred in Oklahoma by Norma Lee Stockseth, Chuck received $32,500 for his win to move his total earnings to $52,093. Evansville Slew was one Oklahoma’s leading sires when the 20-year-old stallion was euthanized earlier this year due to complications from colic. Evansville Slew stood at Randy Gammill’s Diamond G Ranch in Edmond.

The win on Chuck was one of three on the night for Wade. The hat trick gives him 44 wins on the season. He is in third-place in the jockey standings behind Cliff Berry, who also tripled on the night to run his season total to 67 wins.

Longshot in Filly Division
The two previous career attempts for Rah Rah Rachel had managed only a third-place result and a fifth-place finish. The Filly Division of the Oklahoma Stallion Stakes turned out to be a great time for breaking her maiden status as Rah Rah Rachel rolled from last with just a quarter-mile left to gain victory at 25-1 odds.

Owned by Iron Oaks Farm of Oklahoma City and trained by Gene Jacquot, Rah Rah Rachel was ridden by David Cardoso as she flew between rivals with just fifty yards remaining, catching Black Ocean to win by a nose. She covered the six furlongs in 1:13.80.

A 2-year-old filly by Air Commander from the Deputy Commander mare Rachel’s Commander, Rah Rah Rachel was bred in Oklahoma by Center Hills Farm. Her stakes-winning check of $32,500 increased her lifetime earnings to $37,606. Rah Rah Rachel became the first stakes winner for freshman stallion Air Commander, a son of Point Given who stands at Mighty Acres in Pryor.