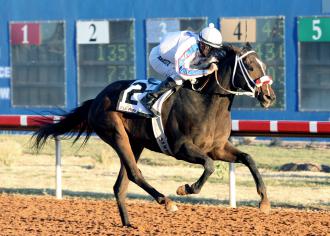 Ol Winedrinker Who won the 1 1/16-mile, $150,000 Zia Park Derby at Zia Park on Saturday as the Texas-bred and New Mexico-based horse repelled the challenge of a field of shippers in one of the final major derby races of the year in the United States. The Joel Marr-trained 3-year-old, bred and owned by Sam and Sammy Stevens and ridden by Carlos Madeira, was one of only two horses in the field of seven from New Mexico facing five horses from out-of-state.  At odds of 6-1, he stalked the pace behind runaway leaders Alsvid and Motown Men, took the lead in midstretch, and drew off to win by 3 3/4 lengths in 1:44.42. Master Rick finished second, and 4-5 favorite Alsvid was third.

“We knew it would be tough and didn’t know if he could compete against such a good field,” Marr said. “But we knew one thing, and that was that he was training as good as he could train and loved the course. I think that’s got to help. He just likes it here.”

Ol Winedrinker Who was coming off three second-place finishes in a row in the 1 1/16-mile, $50,000 Ruidoso Thoroughbred Derby at Ruidoso Downs and two Zia Park allowance races against older horses. After his win in the 6-furlong, $40,000 Norgor Derby at Ruidoso Downs on June 17, his connections decided to try to stretch his speed around two turns.

“We’ve always been wanting to go long, and this is the race we’ve pointing towards for the last six to eight months,” Marr said.

Master Rick, ridden by Ricardo Santana, Jr., for trainer Steve Asmussen, has travelled all around the country competing in major 3-year-old races. He also finished third in the 1 1/8-mile, Grade 2 $500,000 Super Derby at Louisiana Downs in September and won the 1-mile, $100,000 Northern Spur Stakes at Oaklawn Park in Arkansas in April. Alsvid, with jockey Chris Landeros aboard for trainer Chris Hartman, had won four stakes races this year. He was trying to step up in distance to two turns following recent sprint stakes wins at 6 furlongs in the $100,000 David M. Vance Stakes and $200,000 Remington Park Sprint Cup at Remington Park in Oklahoma.