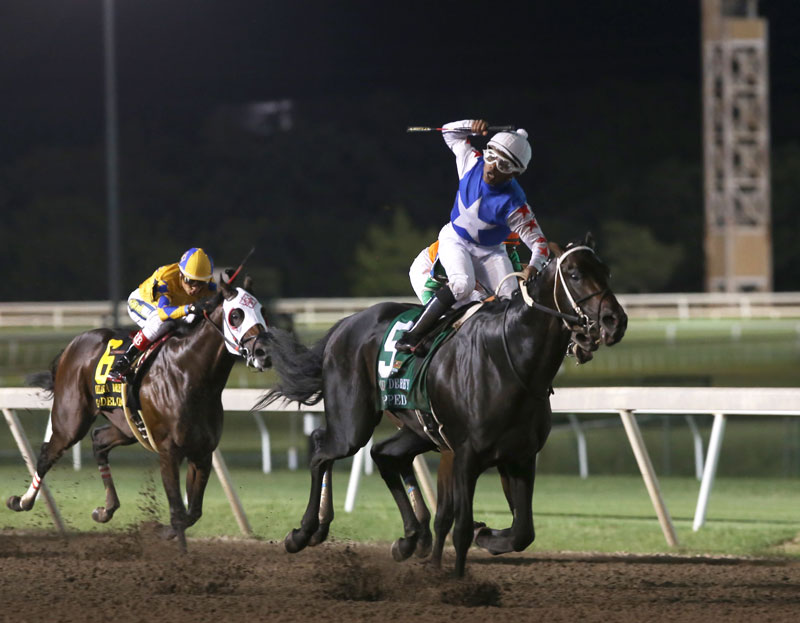 Steve Asmussen, a national Hall of Famer trainer, has won virtually everything a conditioner can win in the horse racing business: the Eclipse Award; most wins in the nation; Breeders’ Cup races and 12 seasonal training titles at Remington Park. Nearly everything, except a victory in the Grade 3, $400,000 Oklahoma Derby.

Asmussen had never won the Oklahoma Derby in 21 previous tries. That streak ended Sunday night as he saw his 11-1 outsider Untrapped romp to victory in the Oklahoma Derby under the excellent guidance of jockey Ricardo Santana, Jr., as they hit the wire 1-3/4 lengths in front of second-place finisher Battle Of Midway.

That’s just how tough this Oklahoma Derby was. Untrapped had run in the Kentucky Derby. He is trained by arguably the top trainer in the country and he still went off at double-digit odds.
Asmussen was laughing in the winner’s circle when asked about not winning in his previous 21 tries. “Yeah, it really is hard to believe, isn’t it?” Asmussen said with a laugh. ‘Well, we ran a lot of seconds and thirds and this is a tough, tough race.”

Untrapped is owned by Michael Langford of Jonesboro, Ark. who has raced horses at Remington Park for many years. Langford was on hand to enjoy his first victory in the Oklahoma Derby as well.

The first thing Asmussen did when he came to the winner’s circle was reach up, pat Santana on the thigh and say, “Great ride.” Rewarding Santana with high praise.

“You know Steve is not just a trainer,” Santana said. “He’s not just my trainer but he’s my family. That meant a lot.”

Asmussen said the key to winning Sunday night, rather than finishing behind other horses in this race – Colonelsdarktemper and Girvin – who had beaten him recently in other races, was letting Santana ride him the way he wanted to.

“He rode him perfectly,” Asmussen said, “This is the best the horse has been and you can chalk that up to maturity.”

“He just seemed to be a different horse tonight,” said Santana. “I really had a lot of faith in him and we had a perfect trip. That was the difference between tonight and the Kentucky Derby. He was in trouble in the Derby and never had a chance.”

Gato Del Oro went to the lead right out of the gate and led until the top of the stretch, setting quarter-mile splits of :23.9 for the opening quarter, :47.54 for the half-mile and 1:11.45 for three-quarters of mile. That’s when Battle Of Midway, third in the Kentucky Derby, began his run.

Battle Of Midway made it to the front into the stretch, but it didn’t take long for Untrapped, sixth coming off the final turn, to collar him. Santana and Untrapped pounced on the 7-5 wagering favorite and pulled away at the sixteenth pole.

The winner earned $239,847 for the victory and boosted his lifetime earnings to $601,755, making it to the winner’s circle in 2-of-10 starts in his career. Untrapped is a Kentucky-bred colt by Trappe Shot from the Giant’s Causeway mare Exit Three. He was bred by Indian Creek & Jonathan Sheppard.

The derby concluded a huge night for Asmussen and Santana as they won four stakes races on the night. Their horses totaled $434,745 with the four black-type scores.