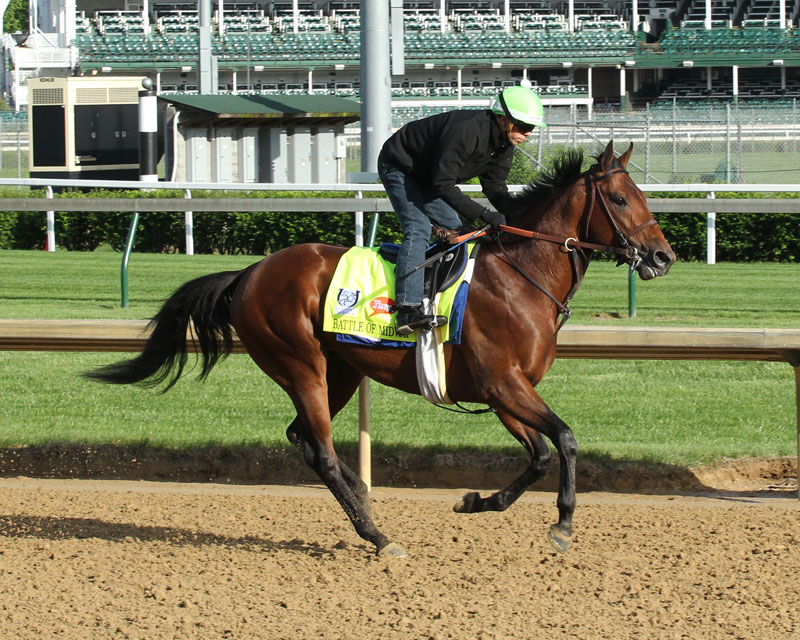 An accomplished field of eight will contest Sunday’s Grade 3, $400,000 Oklahoma Derby at Remington Park. Girvin, the winner of the Grade 1 Haskell Invitational in July, is the leading money-earner in the Oklahoma Derby. However, another colt who also raced in this year’s Kentucky Derby has been tabbed as the morning-line favorite.

Battle Of Midway, third in the Grade 1, $2,000,000 Kentucky Derby at Churchill Downs in Louisville, Ky. in May, has been pegged as the morning-line favorite at 2-1 odds by Remington Park line-maker, Rick Lee.

Battle Of Midway was 7-1/2 lengths behind Kentucky Derby winner Always Dreaming on the first Saturday in May, nearly a month after running second in the Grade 1, $1,000,000 Santa Anita Derby in early April. Hall of Fame trainer Jerry Hollendorfer seeks his second victory in the Oklahoma Derby with Battle Of Midway after winning the 2014 edition with Tonito M. Jockey Flavien Prat will ride in the Oklahoma Derby.

Battle Of Midway won the $100,000 Shared Belief Stakes in his most recent attempt on Aug. 27 at Del Mar. After his Kentucky Derby effort, the Smart Strike colt won the Grade 3, $100,000 Affirmed Stakes at Santa Anita in July before finishing sixth behind Girvin in the Haskell.

Owned by Brad Grady of Covington, Texas and trained by Joe Sharp, Girvin rallied from last in the final quarter-mile to win the $1,000,000 Haskell at Monmouth Park in New Jersey. Robby Albarado piloted the late run in the Haskell and keeps the mount for the Oklahoma Derby.

Girvin’s connections had success at Remington Park last year, winning the Springboard Mile, the top 2-year-old race of the season, with Cool Arrow.

Colonelsdarktemper won the Grade 3, $750,000 West Virginia Derby at Mountaineer Park on Aug. 5 before a recent third-place run at Parx in the Grade 3, $300,000 Smarty Jones Stakes in Philadelphia. Owned by car racing legend A.J. Foyt, Jr. and trained by Jinks Fires, Colonelsdarktemper did not begin his racing career until February this year. While competing at Oaklawn Park in Hot Springs, Ark. the colt by Colonel John broke his maiden at first asking.

Untrapped has danced in many of the year’s graded events for 3-year-olds, finishing well in many but still looking for his first triumph in such a race. Owned by Michael Langford of Jonesboro, Ark. and trained by Hall of Famer Steve Asmussen, Untrapped was second in both the Grade 3 LeComte and the Grade 2 Risen Star at Fair Grounds. The colt by Trappe Shot was then third in the Grade 2 Rebel Stakes at Oaklawn Park in Hot Springs, Ark. before finishing sixth in the Grade 1 Arkansas Derby there. He then finished 12th in the Kentucky Derby before running third in the Ohio Derby and third in the Indiana Derby. Ricardo Santana will ride Untrapped who is 5-1 in the morning-line odds.

Others in the Oklahoma Derby with placing in graded stakes competition include: B Squared, third in the Grade 3, $200,000 Los Alamitos Derby in July and second behind Battle Of Midway in the Grade 3 Affirmed; and McCormick, second in the Grade 3, $250,000 Iowa Derby at Prairie Meadows in July before finishing seventh behind Colonelsdarktemper in the West Virginia Derby.
Battle Of Midway, Girvin and Untrapped represent the first time that a trio of runners that raced in the Kentucky Derby during the spring, have then competed in the Oklahoma Derby at Remington Park that fall.