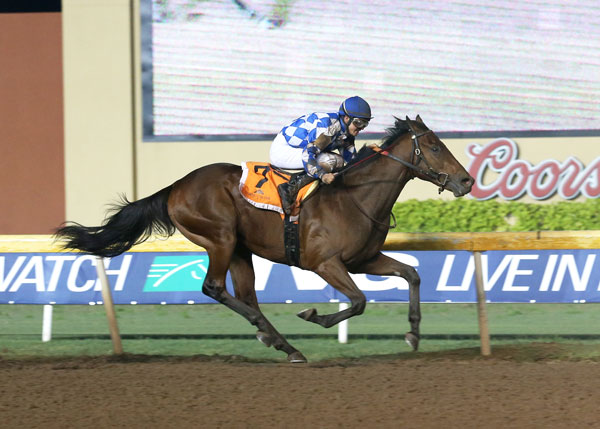 U S Officer lodged a big closing move along the rail to pass the pace-setting Divine Kaleb in the final yards to win Friday’s $100,000 Clever Trevor Stakes at Remington Park. The race is the final local prep event for 2-year-olds aiming for the Springboard Mile in December.

Owned by the Weatherford, Texas partnership of Jerry Durant and Bill Jordan, U S Officer is trained by Danny Pish. Jockey David Cabrera, the only jockey to win on the colt, had the mount for the second race in a row. U S Officer settled near the back of the nine-horse field in the Clever Trevor and was last, nearly 10 lengths from the front, as the field turned for home, with plenty of work to do.

“I was not really expecting to be that far back but the race played out like that,” Cabrera said after the trophy presentation. “This horse, he can sit anywhere we put him. He’s a really nice horse, an aggressive horse. He made up ground so it was great.”

U S Officer moved from the back of the field through an opening at the rail, taking the shortest path possible down the stretch to the finish. Divine Kaleb battled with D R C Majestic Man early, setting a quarter-mile fraction of :22.74 seconds. Divine Kaleb then took the lead through the turn and into the stretch, posting a half-mile in :45.84 and 1:10.41 for six furlongs. Diving Kaleb had opened up a six-length lead with a furlong to go but could not maintain to the finish as U S Officer flew past to his inside, winning by 2-1/2 lengths in 1:24.63 for seven furlongs over a fast track.

Divine Kaleb held on for second while Cu Rahy rallied outside for third, 2-3/4 lengths behind U S Officer.

Pish is assisted at Remington Park by Joseph Smith who was impressed with U S Officer and noted that he may make his next attempt in the $300,000 Springboard Mile on Dec. 11. “We’ll take him back and evaluate, I would think that we will (enter the Springboard) but it’s going to be that he comes back good and just get him ready for the next one. As 2-year-olds, a lot of times it’s just the best 2-year-old that day wins. As he’s gotten older, it looks like he wants to go farther so that’s hopefully what he’ll do.”

U S Officer has won two consecutive races at Remington Park and has three wins overall from six attempts. Bred in Kentucky by Jerry Durant, U S Officer is a colt by U S Ranger from the Officer mare Lacey Officer. The $60,000 payday for the Clever Trevor Stakes boosts the career earnings for U S Officer to $99,565.