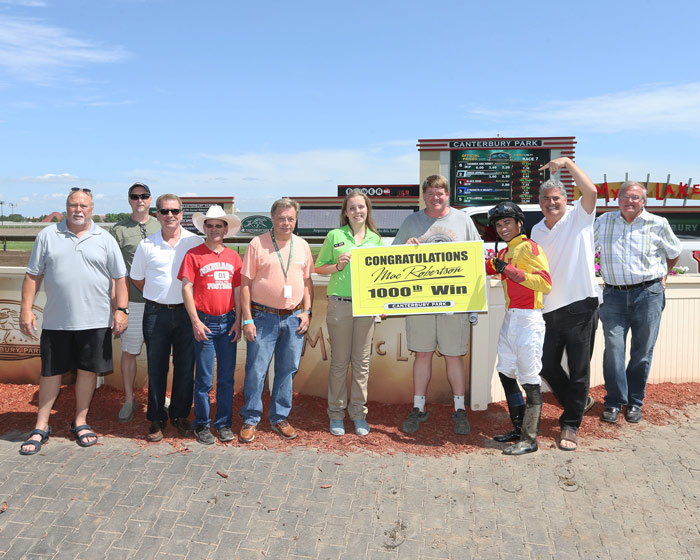 Thoroughbred trainer Mac Robertson won his 1,000th career race when Thunder and Honey crossed the finish line in first place in the seventh race on Saturday at Canterbury Park. The multiple graded stakes-winning trainer achieved the milestone in the 4,412th start of his career. Robertson has earned more than $23.5 million in purse money for his owners.

Robertson, 42, began training in 1994. His first career victory came that year at Ak-Sar-Ben Race Track in Omaha, Neb. He saddled only 72 starters under his name through 2004, often overseeing a division of his father Hugh’s stable instead. In 2005, Robertson made a name for himself at Canterbury, winning the first of nine consecutive training titles. He was inducted into the Canterbury Park Hall of Fame in 2011 and is the all-time leader in purse earnings at the Shakopee, Minn. racetrack.

“I’ve had good teachers,” Robertson said. “Jim Robertson, Bun Colvin. I worked for my dad for 10 years. My dad’s won more than 1,000 races, and now I’ve done it. It says we’re doing something right.”

This was Robertson’s 609th win at Canterbury. He has captured nearly every meaningful stakes race at the track, but his biggest victory came at Oaklawn Park in the 2009 Grade 2 Rebel Stakes with 3-year-old Win Willy, who went from last to first at 56 to 1 odds. Win Willy followed that win with a fourth-place finish in the Arkansas Derby and was ready to be entered in the Kentucky Derby before being withdrawn from consideration due to a possible ankle injury one day before entry time. Win Willy returned to racing months later in a career that extended to 2014. Throughout 37 races under Robertson’s guidance, Win Willy also won the Grade 2 Oaklawn Handicap in 2011 and earned more than $1 million in purses.