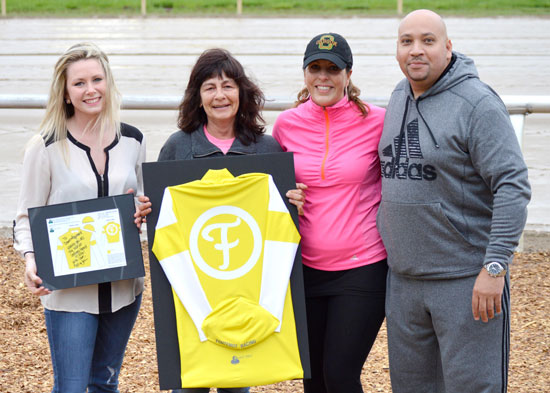 Prior to the start of racing Saturday, April 30, a special presentation was made to Trainer Dawn Fontenot in honor of her father, Larry Fontenot Sr. Fontenot’s owner, Rick Plaskett, presented Dawn with a brand new set of aerodynamic silks by Speed Silks in the stable colors of her father.

“In late 2015, Dawn lost her father, legendary Graded Stakes trainer Larry Fontenot,” said Plaskett. “Unfortunately she was unable to be with him prior to his passing. In addition, she missed the birth of her new grandson because she was busy training and racing our horse at Fair Grounds Race Course over the winter in Louisiana. We wanted to do something for her to show how much we care and that she is like family to us.”

Plaskett and his girlfriend, Jen, flew into Indiana from their home in Atlanta for the presentation. Joining Fontenot for the presentation was her daughter, Morgan. Plaskett had the yellow and white silks in a display and also presented Fontenot with a smaller memento of the silks.

“We have a horse in the seventh race tonight (Banksy) and I hope you can have our jockey, Sammy Bermudez, wear these silks tonight,” Plaskett told Fontenot in the special winner’s circle presentation.

“I thank you so much for this honor,” said an emotional Fontenot.

Fontenot, a native of Louisiana, followed her father into horse racing. She received her trainer’s license in 2011 and is in her fourth year of competition, racing in Louisiana in the winter months and then competing with her small stable in the Midwest during the summers. She and Plaskett claimed Banksy last fall at Indiana Grand and got their first win with the grey daughter of Concord Point in late 2015 at Fair Grounds. Banksy was making her third start of the year and her first start at Indiana Grand in 2016 on the Saturday racing program.

“Dawn’s dedication to the sport of Thoroughbred horse racing as well as the countless hours she spends at the racetrack tending to the horses she trains is unbelievable,” said Plaskett, who is a native of the U.S. Virgin Islands and a member of the U.S. Virgin Islands Tennis Team. “As an owner, my girlfriend, Jen, and I would like to honor her in this small way by saying thank you.”