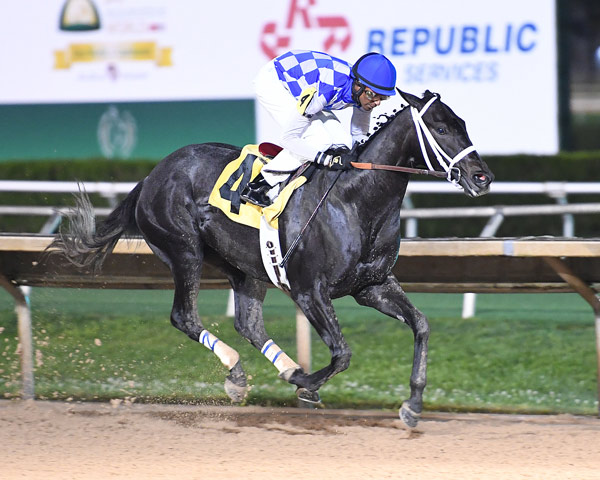 It was a memorable week for trainer Bret Calhoun, who tied the knot on Sunday, March 5 with Sara Escudero and followed that up by winning both Friday night features.

Wayne Sanders and Larry Hirsch own Kat’s Infatuation, who was a game runner-up to Archer City last month and became a stakes winner this evening. Jockey DeShawn Parker rode the Silver City filly, patiently sitting off the early pacesetters, Cat’s Kitten and Mighty Ferrari. She passed both heading into the turn, drawing off by 8 1/4 lengths in a final time of 1:11.23.

In her early races, Calhoun described Kat’s Infatuation as a “pure speed” filly, but has seen her mature and become much more versatile. Tonight, she showed an added dimension, handling a muddy track surface for the first time with no problem.

“She ran a great race,” said Calhoun, who is at Oaklawn Park this weekend. “I loved the way she sat off the pace, but put herself right into the race. You could see that she will handle the stretch-out to a mile at Lone Star.”

Calhoun’s other trainee Gold Shock, owned by Douglas Scharbauer, closed for second under Lindey Wade. The daughter of My Golden Song has picked up checks at Lone Star Park, Retama and Remington Park.

“Maybe she’s not quite as fast as some of my other fillies, but she definitely fits at this level,” added Calhoun.

Kat’s Infatuation ($3.40) has now won three of her six career starts and added $30,000 for the stakes victory tonight. She was the third Bara Lass champion for Calhoun, who won it in 2009 with Tin Top Cat and in 2014 with Scooter’s Choice, who was also owned by Sanders and Hirsch.

More Than Most, a 4-year-old Indygo Mountain filly, was sent off as the prohibitive favorite and lived up to her billing. Bred by the late Clarence Scharbauer and owned by his son, Douglas, the multiple-stakes winner won the mile and one-sixteenth stakes in gate-to-wire fashion under Parker. He guided the dark bay filly through the the quarter-mile in :25.44 and the half-mile in :48.65. She crossed the wire in 1:44.75, a margin of six lengths over K One Spirit.

“The surface switch was not a factor,” said Calhoun. “Maybe the only difficulty for her is soft turf, so I guess it was good that the race was run on the main track. She is definitely on form and did what we knew she could do tonight.”

Parker, who won three races on the card, had high praise for both of his stakes winners.

“Bret told me to get her out in front as she does not like the kick back,” said Parker. “She was really relaxed and had plenty left. Even though it rained hard, the track felt great; Sam Houston’s surfaces are always so good.”

This was the eighth career win for More Than Most ($2.40), who boosted her lifetime earnings to $272,464. Calhoun was unsure of her next start.