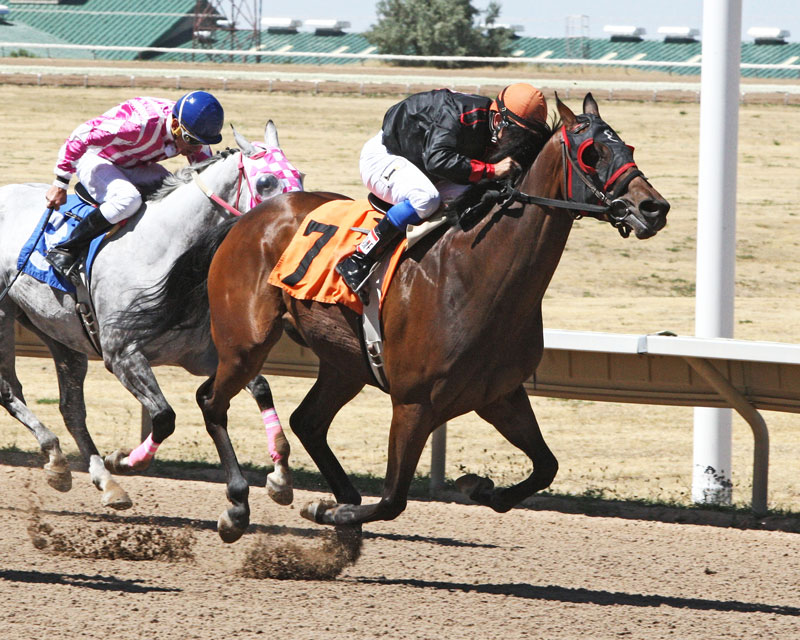 Thoroughbred racehorse Geno’s Bambino has begun training for a new sport while in the middle of a relatively long racing career. Because of the one-dimensional focus on speed and the year-round nature of horse racing, it is rare for racehorses to attempt a second sport while they are racing, although many will go on to new careers as jumpers, polo ponies, and more after retiring.

Yet like Bo Jackson and Deion Sanders for baseball and football, Geno’s Bambino will use his offseason from racing at Arapahoe Park in Colorado to compete in “Colorado’s Most Wanted Thoroughbred” at the Rocky Mountain Horse Expo on Saturday, March 11, for Thoroughbreds showcasing skills in English and Western disciplines outside of racing. Geno’s Bambino’s competition will be award-winning Colorado-based eventer Faster Than Duke, hunter-jumper Light After Dark, and racehorse-turned-ranch-horse-turned-eventer Royal Mr. G.

The four finalists will each have the chance to demonstrate a variety of skills in a freestyle format. The winner will be decided based on feedback from the audience and a panel of judges with $1,000 in prize money up for grabs. The competition presented by Retired Racehorse Project, CANTER Colorado, and Arapahoe Park is designed to showcase the versatility of the Thoroughbred breed that can be successful race, sport, and pleasure horses.

Geno’s Bambino, a 6-year-old bay gelding, won his most recent start at Arapahoe Park on August 13, 2016, a 5 1/2-furlong claiming race that he captured by a half-length under jockey Mike Ziegler. Trainer Neil Koch claimed Geno’s Bambino out of that race for $2,500. Because Koch races exclusively at Arapahoe Park—Koch’s last start outside of Colorado came in 2012—Geno’s Bambino will have nine months off before returning to racing when the 2017 season at Arapahoe Park begins on May 19.

So the veteran of 38 starts and four wins in Colorado, California, and Nebraska from 2013 until this year has begun a second career in competitive trail and obstacle training at Golden Creek Equine in Cheyenne, Wyoming.

“To have a horse who is still active in racing and be able to do what he does is quite simply amazing,” said rider Kaitlyn Rinker, 19. “He is extremely trustworthy. I have not only put my own life into his hands but would trust him to take care of any little kid.”

“I never thought I would be owning or training my own horse, but he proved to me dreams can come true,” Dunn said. “With hard work and a ton of hours serving, lifeguarding, and riding polo ponies, I was finally able to find my dream horse.”

Royal Mr. G, who shows under the name Thalweg, also previously raced at Arapahoe Park. After retiring from racing, he worked cattle on a ranch in South Dakota and then became an eventer with rider Kristi Radosevich.

Faster Than Duke was stakes-placed with a second in the 2012 Chinook Pass Stakes at Emerald Downs in Washington and had a comprehensive racing career with starts on dirt, turf, and synthetic tracks. Now showing as Dukes Up, the horse is competing as a beginner novice eventer whose rider, Dominika Hanson, won the Mountain State Eventing Association Central Colorado Chapter’s award for top first-year beginner novice rider.

The 2017 Rocky Mountain Horse Expo will take place from March 10 to 12 at the National Western Complex in Denver. The Colorado’s Most Wanted Thoroughbred competition will be on March 11 at 1 p.m. Throughout the weekend, Arapahoe Park, CANTER Colorado, and Retired Racehorse Project will showcase booths and demonstrations about racing and riding.