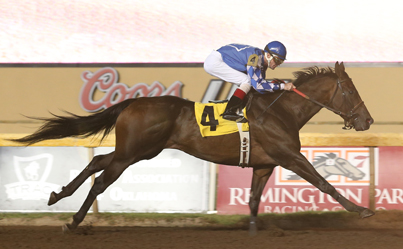 The Moore, Oklahoma, tornado of May 20, 2013, devastated thousands of lives in and around the central Oklahoma suburb of Oklahoma City. Horses, and the farms where they resided in the area, were not spared from the destruction. Wednesday night at Remington Park, a fortunate equine survivor from that disaster put on quite a performance in adding to his tale.

The aptly named Stormtoremember made his first start of the year and second of his career, both happening after the tornado. The 4-year-old Oklahoma-bred gelding tracked the early pacesetter Heza Smokey for the first half of the seven-furlong maiden race for state-breds. Entering the lone turn of the race, Stormtoremember was moved to the front by jockey Cliff Berry. Once on the lead in the field of 10, the gelding impressed as he crossed the finish line six lengths ahead Lion Of Lone Oak, with plenty in reserve.

Owned by Reza Aryan of Norman, Oklahoma, Stormtoremember is trained by Kenny Nolen. He recalled the young winner’s situation on the day of the tornado.

“He was at Celestial Acres training center outside of Moore, one of the first areas where the tornado hit,” he said. “Luckily, he was in a barn that had roof damage but structurally was still standing. There was nothing left of the other barns there where many horses were lost.”

Stormtoremember was bred by M.B. Aryan of Norman, and the family raised him before putting him into training.

“I always thought he was a pretty good colt,” Nolen said. “He was special tonight and this is a really nice win. He’s a good story for what he’s been through.”

A son of Actor from the Dance Brightly mare Beata, Stormtoremember earned $20,395 for his maiden triumph.