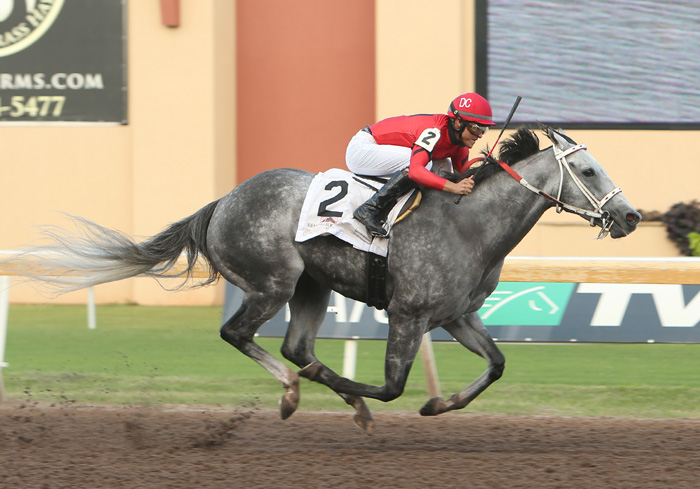 A total of 11 horses have been nominated to the 13th running of the $70,000 Silver Goblin Stakes, including three-time stakes-winning Oklahoma-bred sprinter Welder, scheduled to run Friday, Nov. 16 at Remington Park.

The Silver Goblin is a 6-1/2 furlongs sprint for 3-year-olds-and-up restricted to accredited Oklahoma-breds.

“We’ve just been sticking to his routine since his last race, galloping, jogging him and we had a work at Will Rogers Downs (in Claremore) to just blow him out (Nov. 7) and he breezed an easy five-eighths in a minute and two flat,” said Luneack. “Just trying to keep him happy. The farm (Ra-Max) is about two miles from WRD. I’ve timed it; takes us two and half minutes to get there and we train him right off the van.”

This versatile 5-year-old grey gelded son of The Visualiser, out of the Tiznow mare Dance Softly, has won at five and six furlongs this meet under leading rider David Cabrera, twice on a sloppy track and once on a fast main surface. He was bred in Oklahoma by Center Hills Farm from Springdale, Ark., and purchased from Mighty Acres Farm in Pryor, Okla., a division of Center Hills. Luneack saw Welder in his stall as a yearling at Mighty Acres and asked the owners if they would throw him in as part of a purchase of about five or six horses at $6,400 apiece. Not a bad return with more than a half-million dollars earned.

Welder now has 14 wins from 22 starts, winning five of seven this year, and five of his last six starts. His earnings for 2018 are $287,550. He has never finished worse than third at Remington with a record of 10 starts, six wins, three seconds and one third.

Another stakes winner nominated is a local favorite – Perfect to Please – who won the $70,000 Red Earth Stakes, sprinting 7-1/2 furlongs on the turf course on Oklahoma Derby Day. Perfect to Please is an 8-year-old gelding by Pleasantly Perfect, who won the 2003 Breeders’ Cup Classic and the 2004 Dubai World Cup. This chestnut gelding is out of the Forest Wildcat mare Your Pleasure. He was bred in Oklahoma by the John E. & Barbara R. Smicklas Living Trusts.

Perfect to Please is owned by Elada D. Kirk of Muskogee, Okla., trained by Veronica Griggs and ridden by Kevin Roman and Bryan McNeil this meet. He has won 16-of-69 starts for $535,698 in lifetime earnings and is six-for-nine this year. He has pocketed $183,234 in 2018 for Kirk. He is a multiple stakes winner, taking the Red Earth here twice, this year and on Aug. 21, 2015, once with McNeil and once with Roman. Jockey Curtis Kimes rode him to a stakes win in the $55,000 Classics Cup at Will Rogers Downs on May 15 this year. Perfect to Please’s record at Remington is 32 starts, seven wins, four seconds and five thirds for $319,450 over this track.

Serengeti, owned by Foster Racing Stables of Clinton, Okla., and trained by Kenny Nolen, ran second, beaten only a length by Welder in the Remington Park Turf Sprint. Shannon C, owned by B and S Racing of Springfield, Mo., and trained by Scott Young, ran second to Welder in the Oklahoma Classics Sprint, beaten by 4-3/4 lengths. Sendmethemoney, owned by Bobby and Vickie Hammer of Elmore City, Okla., and trained by Michael Biehler, is undefeated after two starts, breaking his maiden by 7-1/2 lengths on Oct. 4 and then beating winners in allowance conditions next time out on Nov. 3 by 3-1/2 lengths.

Others nominated to the Silver Goblin include Daaher’s Success, Fred C, and Shotgun’s Night.