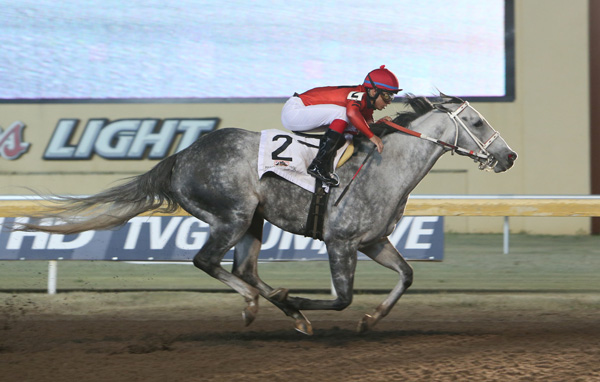 The 5-year-old gray gelding known as Welder streaked down the stretch like the lightning bolt he is to take his fourth stakes victory of the meet Friday night in the $70,000 Silver Goblin Stakes at Remington Park.

He was the heavy wagering favorite at 1-9 odds on the toteboard for the race and now stands as the 1-9 favorite in the race for Champion Horse of the Meet for owner Ra-Max Farms (Clayton Rash) of Claremore, Okla. and trainer Teri Luneack. Leading rider David Cabrera was in the irons for the fourth time this meet and has never lost on this horse in four tries.

“My stomach hurts,” said Luneack, when asked about the accolades for which Welder is lined up to take home. “It’s always so nerve-wracking. I can’t eat.”

“I tell you what, Floyd, he put a pretty good ride on me,” said Cabrera, Remington’s top rider, who won for the 77th time this meet and the 200th time in his career at this Oklahoma City track. “He had me confused for quite a bit.”

“Welder, he just carried me there,” said Cabrera. “I let him go to the outside and he was like, ‘Let’s go now.’”

Welder covered the 6-1/2 furlongs in 1:15.61 over a fast track, just a few ticks off the stakes record of 1:15 set by Zee Oh Six in the first running of the Silver Goblin in 2005. Welder paid $2.10 to win and the $2 exacta payout with Shannon C was $3.40. This was the second year in a row for Welder to visit the winner’s circle in this stakes race. He joins Okie Ride, Johnny Whip and Steal Your Face as multiple winners in the Silver Goblin. Okie Ride won it three times in 2012, 2013 and 2016. The others won the race twice each, just like Welder.

Shannon C set fractions of :22.50 for the quarter-mile and :44.75 for the half-mile, then Welder took over and hit the three-quarters of a mile in 1:09.04. Welder crossed the finish 6-1/4 lengths ahead of Shannon C. The third-place finish, Rockport Kat, was 7-1/4 lengths behind the winner. Perfect To Please was an uninterested fourth, beaten 12-3/4 lengths, to round out the field.

Welder, named for owner Rash’s international welding business, is a bit of a miracle horse for these connections. Luneack only started training racehorses in 2013, but she has always had an eye for horse flesh and went to Mighty Acres Farms in Pryor, Okla., when Welder was a yearling. Rash had picked out four or five horses to pay $6,400 apiece for when Luneack saw a young gray standing in the corner of his stall and asked if they’d throw him in to the package for another $6,400. The rest is history. He earned $42,000 tonight and now has won seven of his last nine starts, six of them in stakes-company. His lifetime record is 15 wins from 23 starts for a bankroll of $635,151.

One of the most amazing addendums to Welder’s story is that he is vanned to Remington Park in Oklahoma City, from Claremore, Okla., every time he runs here. That’s a trip of about 135 miles one way.

“He gets really nervous on the van, too,” said Luneack. “He is not a good shipper. We usually start at 6 o’clock in the morning, getting ready. We have to leave for Remington by 2:30 or so because we have vet check at 5 p.m.” The Silver Goblin Stakes field left the gate at 9:52 p.m.

“So, all you guys out there, you can win stakes from the haul-in barn,” Luneack said.

With one other caveat, the horse has to be akin to the equine version of Superman.

Welder is a gelded son of The Visualiser, out of the Tiznow mare Dance Softly. He was bred in Oklahoma by Center Hills Farm from Springdale, Ark., and purchased from Mighty Acres Farm, a division of Center Hills.

Luneack said Welder would get a rest and then likely make his next start at Oaklawn Park in Hot Springs, Ark. in 2019. That track’s schedule shows the $100,000 King Cotton Stakes on Feb. 9 as the first sprint for older male horses. No need to bring fireworks. Welder provides his own.