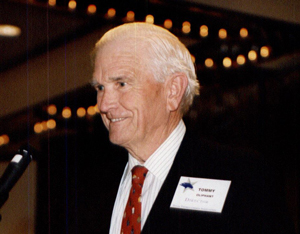 Oliver Tom “Tommy” Oliphant, 88, of Sabinal, Texas passed away on Tuesday, May 20.

Tommy was born on March 2, 1926, in Matador, Texas, to the late Boone & Ruth (English) Oliphant. He grew up in Uvalde, and at 14 he started galloping racehorses for Mr. E.F. Woodward at the Valdina Farms near Utopia. During that time he met and married the late Maurine Oliphant on Sept. 25, 1943. They were married 68 loving years.

At 18, he joined the Marine Corp during WWII, serving in the Pacific Islands where on Feb. 22, 1945, he was wounded on Iwo Jima. He returned home and started training Thoroughbred racehorses in Del Rio, Texas, and in many other states including the Fair Grounds in New Orleans, where he was the youngest licensed trainer on the track at that time.

In 1959, along with Dr. Dan Saunders, he built Sunny Clime Farms in Texas, where he eventually retired as a horse trainer, breeder and owner. He had a blessed and wonderful career spanning over 60 years. He received many awards, including being inducted to the Texas Horse Racing Hall of Fame. He also served as a Texas Thoroughbred Association Director from 1989 through 2004 and received the T.I. “Pops” Harkins Award for Lifetime Achievement from the TTA in 1997.

He was also a steadfast worker in the Sabinal United Methodist Church in Sabinal. He loved his family, friends, church and of course his horse racing.

He was preceded in death by his wife, Maurine; son, Woody Wayne; and daughter, Tommie Lee Azopardi, along with six brothers and one sister.

Click here for a link to the funeral home with more information.