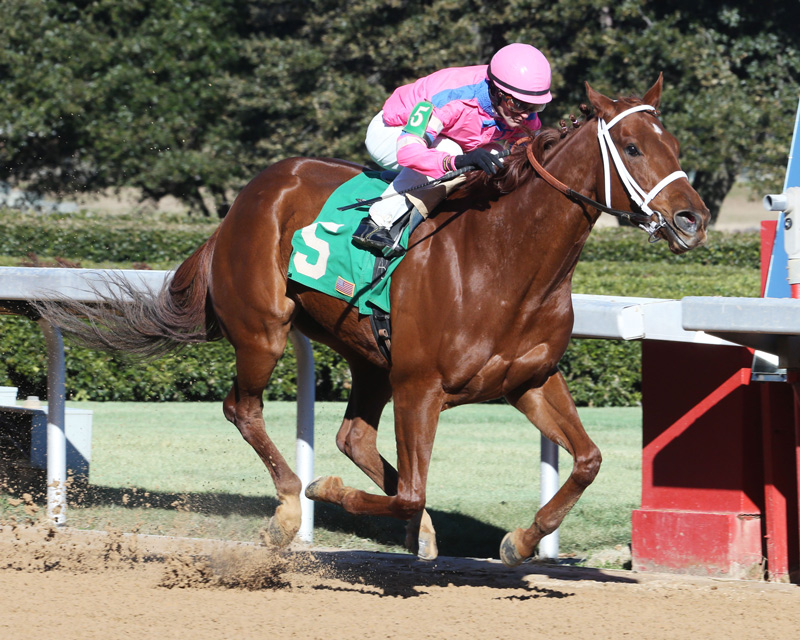 Shortly before trainer Tom Van Berg would saddle his first starter in a decade Jan. 12 at Oaklawn, paddock analyst Nancy Holthus was a few feet away preparing to deliver insight on the fifth race, a third-level allowance/optional claiming sprint for older fillies and mares.

What unfolded next was truly a profound moment.

Van Berg and Holthus – separated by a wooden partition in stalls 5 and 12 – inched toward the back of the compartments and pressed a hand against the plexiglass stripped near its top, a show of love for the man who would watch this race from the heavens.

The man, of course, was Hall of Fame trainer Jack Van Berg, father of Tom, trusted friend of Nancy and one of most iconic figures in Thoroughbred history.

The horse was Profound Moment, who represented the first starter for Team Van Berg since Jack’s death Dec. 27 in Little Rock, Ark., at the age of 81.

Holthus had known Van Berg for more than 20 years, helped plan his funeral and spoke at his celebration of life ceremony Jan. 8 at the Hot Springs Convention Center.

“Just seeing that horse walk in the paddock with the purple and gold blanket, my heart wound up in my throat,” Holthus said. “Tom was literally saddling behind me, and I kind of turned around and put my hand on the glass and just kind of started tearing up. He came over and put his hand on the glass. It was just one of those moments where we were kind of telling each other, you know, Jack’s here.”

Many assembled for a winner’s circle photo following that fifth race pointed to the sky to recognize the aptly named Profound Moment’s front-running one-length victory under Alex Birzer.

“Unbelievable,” said Tom Van Berg, who hadn’t started a horse since Jan. 1, 2008. “I think that was 100 percent the big guy above still working. He carried her the last eighth of a mile home.”

Tom Van Berg, 48, won the $100,000 Razorback Handicap (G3) with Sonic West at the 2004 Oaklawn meeting, but quit training four years later to help raise a family. When his father’s health began declining last summer, Van Berg gradually moved back into a position he held from 1999-2008, when he won 158 races as a trainer of record.

Approximately 30 horses at Oaklawn, most previously with his father, are now under Tom Van Berg’s care.

Regarding Profound Moment (2 for 2 at the 2017 Oaklawn meeting for Jack Van Berg), Tom Van Berg said there were no nerves – until he saw a misty-eyed Holthus in the other stall.

What followed was a profound moment.