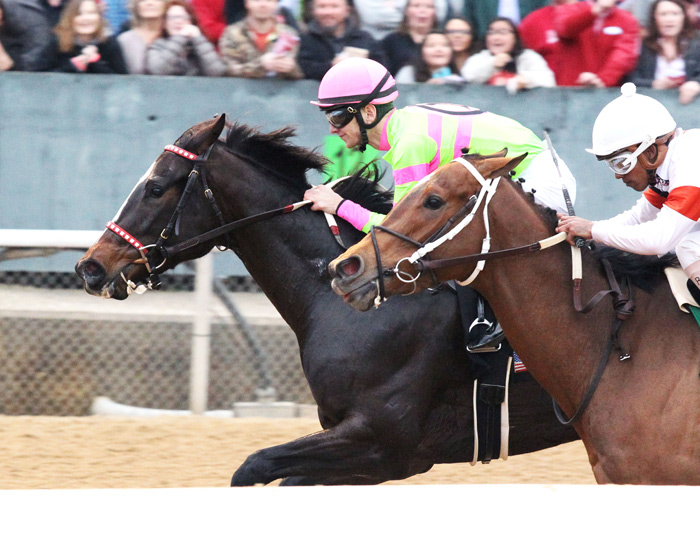 Amy’s Challenge bobbled slightly at the start and was third early as Mia Mischief and Vision of Justice raced through an opening quarter in :21.48. She moved into to second place before a half mile in :44.49 and from there it was a two-horse race as the fillies began to distance themselves from their rivals rounding the turn for home. Amy’s Challenge and Mia Mischief raced head and head through the stretch until the final stride when the winner gained a neck’s advantage at the wire in a final time of 1:10.61 for the six furlongs on a fast track.

Secret Passion came on late to be third and was followed by Getupbabygetup, Vision of Justice and Thoughtless. Minit to Stardom was scratched.

“It was actually pretty good,” winning rider Jareth Loveberry said of his trip. “I just sat off of it, kind of let the speed go with each other and sat right there. It kind of dictated where we wanted to be. She is all heart down the lane, that horse. Head to head she dug through and finished strong.”

Amy’s Challenge entered the race with two wins in as many starts as a 2-year-old at Canterbury Park, both against males. She was named Horse of the Meet at the Minnesota track.

The next race for 3-year-old fillies is the one-mile Martha Washington Stakes Feb. 10.