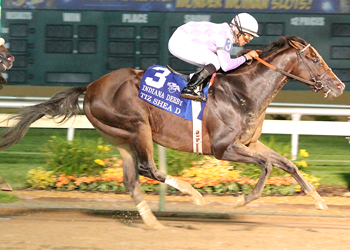 Tiz Shea D and jockey Jose Lezcano used a perfectly timed move to rally home for the win in the 21st running of the Grade II $500,000-added Indiana Derby presented by the Indy Star Saturday, July 18 at Indiana Grand. The race was the highlight of the program that featured six stakes with purses in excess of $1 million.

Starting from post three, Tiz Shea D appeared to leave the gate with some speed but was no match for Mr. Z who powered out along the inside for jockey Joe Bravo. Mr. Z had the top spot secured as expected before the eight-horse field hit the first turn, leading the way over a racetrack that had become sloppy due to heavy rains earlier in the night. Heading down the backstretch, Mr. Z was in full control of the fractions as Tiz Shea D sat patiently behind through early fractions of :24.21, $48.31 and 1:11.64 during the one and one-sixteenth mile race. Around the turn, Mr. Z still had the field at his heels and appeared to be primed and ready for the stretch drive home when he swung wide at the top of the stretch and was immediately joined by Tiz Shea D on the outside and Divining Rod and Alex Cintron on the inside.

Midway through the stretch, the field began to tighten up and Tiz Shea D got a head in front but Mr. Z fought back between horses, creating an exciting scenario to the finish line. In the end, Tiz Shea D was able to move ahead for the win by one and one-quarter length over Mr. Z, whose saddle had slipped forward in the stretch. Divining Rod finished a head back in third. The time of the race was 1:42.51.

“He (Tiz Shea D) has been working very good,” said Lezcano. “He broke good and got right in the position I wanted to be in. We let the one (Mr. Z) go and sat right behind him. At the top of the stretch, Mr. Z came out and we went a little wider, but he recovered very quickly and fought hard in the stretch.”

Tiz Shea D came into the Indiana Derby off a second place finish in an allowance race at Belmont Park. Lezcano, who has more than 2,100 career wins and is a leading rider on the New York circuit, has ridden the horse for Trainer Bill Mott in his previous two starts, including a fourth place finish in the Grade II Peter Pan Stakes at Belmont in early May.

“This horse just came in from New York the other day so I give all the credit to the New York crew,” said Kenny McCarthy, assistant trainer to Mott. “Looking at the (Daily Racing) Form, the horse showed speed. Mr. Z is a great horse. Our horse got a little breather down the backstretch, but he raced very well tonight.”

Tiz Shea D paid $10.80, $5.40 and $3.40 across the board as the third choice in the race. The three-year-old son of Tiznow is owned by Brous Stable, Wachtel Stable and Gary Barber. He now has two wins in six starts and increased his career bankroll to more than $464,000. Tiz Shea D was unraced at two for Mott, who is best known as the trainer of the great racehorse Cigar, who retired as the sports richest racehorse ever with nearly $10 million in earnings. This was the first win in the Indiana Derby for both Lezcano and Mott.

“Indiana Grand is becoming a national force in Thoroughbred and Quarter Horse racing,” said Jim Brown, President and COO of Centaur, Inc. and General Manager of Indiana Grand. “Our racing attendance and wagering is up over 25 percent this year. We continue to build and improve our racing product and the entire Indiana Grand experience.”

The Indiana Derby and the Indiana Oaks were both broadcast live on WISH TV Channel 8 based in Indianapolis. Anthony Calhoun, WISH TV Sports Director, and Peter Lurie, nationally known racing analyst, co-hosted the hour long show. In addition to the two races, the program included features on Indiana racing as well as a behind the scenes look at the preparation that goes into a race at Indiana Grand.

“I think we took another huge step forward this year in Indiana racing and with the Indiana Derby,” said Jon Schuster, vice president and general manager of Indiana Grand. “We continue to be very pleased with the community support of our event and are thrilled with such an outstanding, enthusiastic crowd that came out to watch this year’s race. The addition of WISH TV broadcasting the race live this year and the partnership with Indy Star and other sponsors has really boosted our entire Indiana Derby event.”

For a complete recap of all the stakes on the Indiana Derby card, go to indianagrand.com.