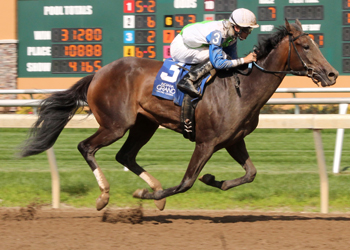 After the one mile race was taken off the turf, the original field of eight was whittled down to six for the one mile and 70 yard run on the dirt. As expected, Rodney Prescott got race favorite Comforter up to the front spot from the start and made the rest of the field chase him around the track. After a brisk first quarter in :23.68, Comforter set comfortable fractions of :47.70 and 1:38.86 as the field tightened up around the turn.

In the stretch, Comforter dug in gamely as several opponents made an attempt to get to the lead. Heart’s Song was widest of all and came charging hard toward Comforter, who was not giving up without a fight. In the end, Heart’s Song took control and won by two and one-quarter lengths while Comforter was a solid second over Lady Fog Horn and Indiana Grand’s Leading Rider Albin Jimenez for third.

“Turning for home, my filly (Heart’s Song) always finishes well, so I was pretty confident in the turn,” said Hernandez Jr. “I was able to get her over in the four path and get her face clean and she ran home.”

Owned by Bernard Schaeffer and trained by Bill Connelly, Heart’s Song remains undefeated for 2015 with her second straight win. The three-year-old filly is now four for eight lifetime and pushed her career earnings over $218,000 with her win in the Ellen’s Lucky Star Stakes. The time of the race was 1:43.16. As the second favorite in the race, Heart’s Song paid $6.60, $3.00 and $2.20 across the board.

The stakes win is not the first title for Heart’s Song. She was also victorious last year at two in the $85,000 City of Anderson, turning in a stakes record performance under the direction of Jockey Corey Lanerie. The daughter of Desert Party polished off her freshman season with a Graded Stakes placed effort with Hernandez Jr. aboard in the $200,000 Golden Rod at Churchill Downs. She has been training at Churchill and came back to racing in mid June.

“I had been working her (Heart’s Song) over at Churchill, and she’s been working really, really well,” said Hernandez. Jr. “Going in to that allowance last time we were pretty confident and that was a pretty decent group of fillies she beat. And she came back today and proved she can run as good as she’s been training.”

Devil’s Due West and Jockey Fernando De La Cruz were on a mission and accomplished their goal, winning the $85,000-added Snack Stakes with authority. The duo rallied gate to wire for the win, their second straight trip to the winner’s circle.

Starting from post three after the field was reduced down to eight starters due to a move off the turf, Devil’s Due West duplicated his last outing and rolled out quickly for the top spot. Morgan’s Raider and Alex Contreras pressed the pace early the field advanced into position in the final turn with hopes of overtaking Devil’s Due West.

In the stretch, Daddy Justice and Israel Ocampo had the best shot at reaching the leaders, but Devil’s Due West did not slow down, posting a three and one-half length win in a time of 1:42.88 for the one mile and 70 yard distance on the dirt track. Daddy Justice was a comfortable second over Memphisinmay and Brian Hernandez Jr. who were well in front of the rest of the pack for third.

Devil’s Due West is now three for 10 lifetime and topped $144,000 in career earnings with the win. The Devil His Due gelding is owned by Tami and James Eads and trained by Michael Weaver. All 10 of his career starts have been recorded at Indiana Grand. The win in the Snack Stakes was his first career stakes victory.

“If we got the lead, I thought it would be tough to catch him (Devil’s Due West) in the stretch,” said Weaver. “He’s a pretty nice horse. There was no concern about it (the race) coming off (the turf). I really think he’s better on the dirt. When it came off the turf, I thought it’d be better.”

Weaver noted that the next start for Devil’s Due West will most likely be the $150,000-added Governor’s Stakes set for Wednesday, Aug. 12. “I think that’s where we’ll be next,” added Weaver.