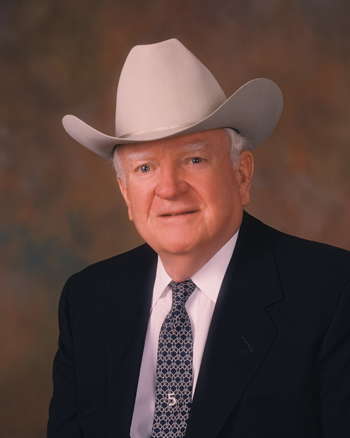 The Texas Thoroughbred Association has announced that the Texas Stallion Stakes Series will be renamed to honor Clarence Scharbauer Jr., the longtime leading Texas owner and breeder who passed away in February.

The series of races for progeny of Texas stallions will now be known as the Clarence Scharbauer Jr. Texas Stallion Stakes Series. The $450,000 series of races has three sets of stakes with a $75,000 purse in divisions for fillies and colts/geldings. The series annually begins in the fall at Retama Park with a six-furlong sprint for 2-year-olds and then moves to Sam Houston Race Park with a seven-furlong test for 3-year-olds before concluding at Lone Star Park with 3-year-olds going a mile in the spring. The Texas Stallion Stakes divisions will retain their individual names honoring great Texas-breds of the past: Darby’s Daughter, My Dandy, Two Altazano, Jim’s Orbit, Got Koko and Stymie.

“Over the years, Mr. Scharbauer has done much to support the Texas breeding and racing industry through Valor Farm, and renaming the Texas Stallion Stakes Series for him is a fitting way to show our appreciation,” said TTA Executive Director Mary Ruyle.

Scharbauer, who owned and operated Valor Farm near Pilot Point, Texas, had become synonymous with the Texas Stallion Stakes as horses he bred and owned or those sired by his stallions were consistently in the winner’s circle throughout the history of the series. His most recent victory came in the February 15 Two Altazano division of the Texas Stallion Stakes at Sam Houston, where his homebred Fiftyshadesofgold, a daughter of Valor stallion My Golden Song, won by an easy 2 ½ lengths. Mr. Scharbauer passed away six days after that race.

“Clarence would be so proud and honored to have his name on the Texas Stallion Stakes,” said Ken Carson, longtime general manager of Valor Farm. “He loved racing in Texas and did well with Texas-breds over the years, especially in the Stallion Stakes.”

Scharbauer was a perennial leading owner and breeder of Texas-breds, but is perhaps best known for Alysheba, the 1987 Kentucky Derby winner and 1988 Horse of the Year who ran in the name of his late wife, Dorothy, and daughter, Pam. A statue of Alysheba sits outside the entrance to Lone Star Park.