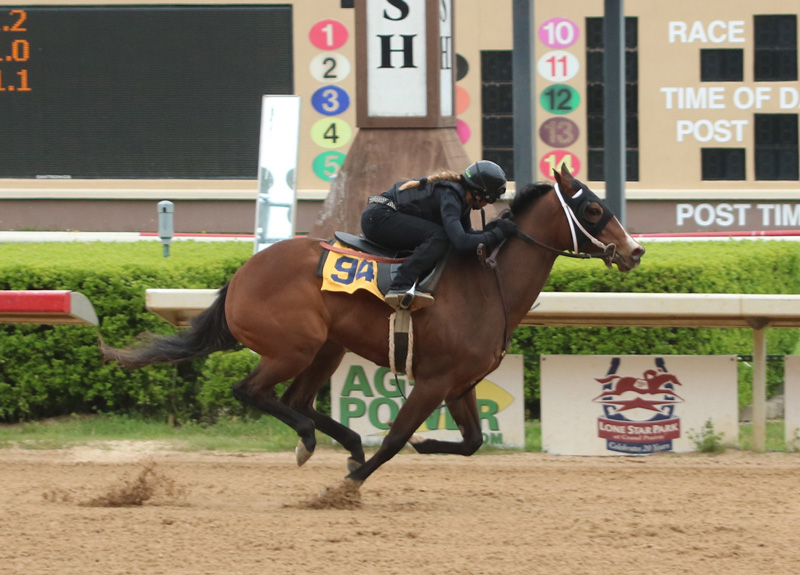 Tuesday’s Texas 2-Year-Olds in Training Sale on the grounds of Lone Star Park concluded with a sizable increase in gross sales and a slight decrease in average compared to last year’s smaller catalogue. A total of 106 horses went through the ring at the sale operated by the Texas Thoroughbred Association in partnership with Lone Star Park and 84 horses found new homes. Last year’s auction included 93 head with 70 selling.

“I was really pleased that we attracted a larger catalogue this year after last year’s successful sale, and it was great to see the average almost the same with a nice increase in the gross,” said Tim Boyce, sales director. “We had four horses sell for more than $100,000 with a Texas-bred, Louisiana-bred and two Kentucky-breds, so that shows the variety of quality offerings we had.”

A Louisiana-bred filly named Charlotte G by promising young Louisiana stallion Bind topped the sale with a $140,000 bid from Gary Simms, agent for M&M Racing. The April 30 foal was one of two horses to work the fastest time of :10.2 during Sunday’s under tack show at Lone Star. She is the first foal out of the unraced Summer Bird mare Promise Me G, whose family includes Grade 3-winning Texas-bred Promise Me Silver.

Three other horses cracked six figures, including a Texas-bred colt by Texas stallion Grasshopper who sold for $120,000 from Wolf Creek Farm, agent. Another purchase by Gary Simms, agent for M&M Racing, the colt is a full brother to multiple stakes winner Supermason, an earner of $331,985. He clocked an eighth-mile in :10.4.

Also selling for $120,000 was a filly by Uncle Mo who is a half sister to Grade 1 winner Romance is Diane and Grade 2 winner Romanceishope. Consigned by Inside Move Inc., agent, and purchased by Swan Equine Co., the Kentucky-bred worked :11.2 in the under tack show.

The other six-figure horse was a Kentucky-bred colt by Twirling Candy who sold for $110,000 to Susan Moulton from Twin Oaks Training Center, agent. The March foal covered an eighth-mile in :10.3 to tie for the second-fastest time.

Full results are available by clicking here. Or for results as a printable PDF, click here.

Next up on the Texas sale calendar is the summer yearling sale on August 27.