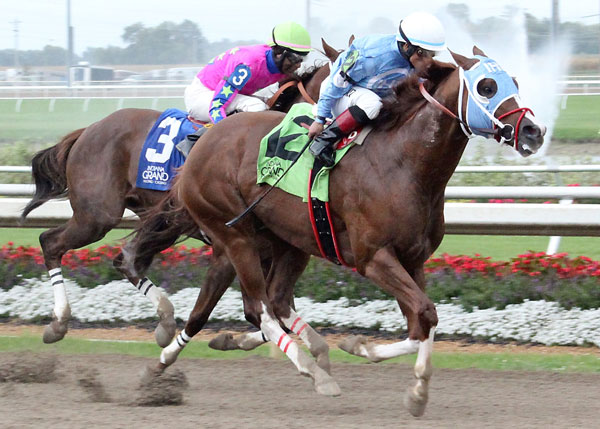 The year 2017 was a banner year for the Indiana Horse Racing Commission (IHRC) and the Indiana Thoroughbred Breed Development Program (ITBDP), as Indiana-breds graced the national stage and brought more awareness to the growth of the regional program. The three year-end award winners announced during the Indiana Thoroughbred Owners and Breeders Association’s annual banquet were a big part of that.

Horse of the Year: Bucchero
Bucchero (Kantharos-Meetmeontime, by General Meeting) had a breakout year in 2017, after scoring a win in the Brickyard Stakes at Indiana Grand Racing and Casino and his first graded stakes win with the Grade 2 Woodford Stakes at Keeneland Racecourse in Lexington. This led to a trip to Southern California for trainer Tim Glyshaw and owners Ironhorse Racing Stable LLC for a shot at the 2017 Breeders’ Cup Turf Sprint, where the stallion finished fourth in a tight race for the finish.

“(2017) was, in one word, fulfilling,” says Harlan Malter, part of the Ironhorse Racing Stable group. “For the horse, it was his opportunity to show the type of horse he is to the whole country. For us, it was the culmination of a long term strategy to let him develop at his own pace and let him become the type of hard-grinding, older horse that drew us to the sport. For the breeders, it was a way for us to pay them back for recommending the horse and the confidence they had in him from the start. To the fans of horse racing in Indiana, it was fantastic to give them a local horse that they could follow outside the state—support that the whole team sincerely appreciated.”

Greg and Karen Dodd of Southern Chase Farm bred Bucchero, who boasts lifetime earnings of $770,741 (as of press time). The 2012 chestnut was purchased for $43,000 at the 2014 Ocala Breeders Horses of Racing Age Sale by Ironhorse Racing from Southern Chase Farm.

Malter, co-owner Vince Liptak and Glyshaw needed many hands to carry their awards from the evening. Team Bucchero also brought home the Indiana Thoroughbred Owners and Breeders Association (ITOBA) Older Indiana-bred Horse of the Year and ITOBA Horse of the Year. The Dodds were awarded an inscribed silver julep cup from the Daily Racing Form for breeding the fastest Beyer of any Indiana-bred in 2017, hitting 99.

“We have been very proud to carry the flag for Indiana in Bucchero’s travels,” says Malter. “He certainly has racked up more airline miles than we expected.”

Bucchero is being aimed for the Grade 3 Twin Spires Turf Sprint at Churchill Downs on Kentucky Oaks Day, May 4, with a campaign aimed towards the Breeders’ Cup World Championships, also at Churchill Downs, in November.

Breeder of the Year: Michael and Penny Lauer
The Lauers once again brought home the trophy as Breeders of the Year, thanks to earning $187,475 in total breeders’ awards in 2017.

The Lauer farm is located in Finchville, Ky., and their horses race not only in Indiana, but at Oaklawn Park, Turfway Park, Churchill Downs, Arlington Park and more. The farm is family-owned and operated, with Michael as the head trainer, Penny managing the bookkeeping, horse juggling and daily operations, and their three daughters, Elizabeth Lauer Sharrett, Sara Lauer Turley and Abby Lauer helping at in the office and on the farm.

The pair also bred and owned the ITOBA Indiana-Sired 3-Year-Old Colt/Gelding of the Year winner Evader (Star Cat-Mor Trust, by Trust N Luck) and took home a special honor from The Blood-Horse as Breeder of the Year.

Stallion Owner of the Year: Swifty Farms
The regal Swifty Farms, located in Seymour, Ind., stands some of the top Indiana stallions that can be seen from interstate 65. Owner Dana Myers has continued the legacy built by her husband, Don, when he originally founded the farm in 1972.

The farm earned $75,455 in stallion awards in 2017, thanks to a strong year from Pass Rush (Crown Ambassador-Profitable Knight). Notional (In Excess [IRE]-Truly Blessed, by French Deputy) earned ITOBA’s Indiana Stallion of the Year.