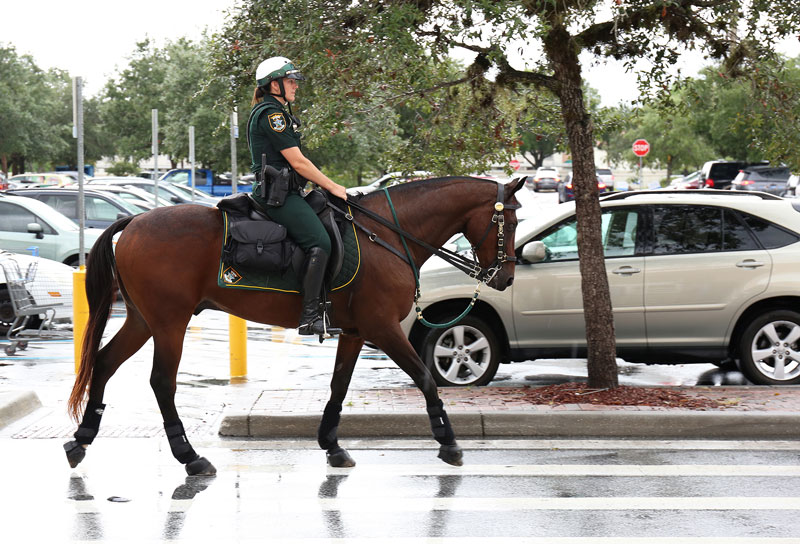 This year’s winner is SSO Valor, registered as Raja’s Best Dancer, a 23-year-old Texas-bred gelding that serves as a police mount with the Sarasota County Sheriff’s Office in Florida.

Valor has been a member of the police force for 14 years. He has worked every large event in Sarasota County and has facilitated crowd control at a Super Bowl, numerous college football games, and a Republican National Convention. After Hurricane Irma, Valor helped with crowd control outside of retail shops.

Valor was also one of two horses used in the Sarasota County Sheriff’s Activities League SADDLES program, an experience for latch-key kids and at-risk kids who learn team building, non-verbal communication, and how to care for horses.

“Valor has served with distinction his entire career at the sheriff’s office, and everyone who has worked with him has been honored and thankful to do so,” said Sergeant Chris Laster, supervisor of the Sarasota County Sherriff’s Office Mounted Unit. “He is an ambassador not only for mounted police units but also for retired racehorses.”

Raja’s Best Dancer is a son of Raja’s Best Boy who spent most of his racing career in Texas. He broke his maiden in a $7,500 claiming race in 1996 at Sam Houston Race Park and added another claiming win at Sam Houston the following year. He retired from the track with a record of 18-2-1-1 and earnings of $7,467.

The young rider award, which recognizes a rider 18 or younger who owns or leases a Thoroughbred for use in 4-H, Pony Club or other activities, and includes a $5,000 prize, was split between two riders: Brenna Tento and Sydney Standing.

Brenna Tento, 16, lives in Harleysville, Pa. She competes in the children’s and Thoroughbred hunters with her Thoroughbred Scatter Creek, also known as Joe.

“When my lease ended, I knew I wanted a horse as versatile and willing as Nash,” Tento said. “In order to have a horse that versatile, I knew that I needed to buy a Thoroughbred.”

Tento plans to use the funds from her award to pay for horse show and travel expenses to competitions, including the New Vocations Charity Show and T.I.P. Championship Horse Show, in which she competed this September at the Kentucky Horse Park in Lexington, Ky.

Sydney Standing is 14 and lives in Cambridge, Ontario. She leases Rosie, registered as Cocoria, and they currently compete in western dressage and Extreme Cowboy shows.

Standing will use the funds from her T.I.P. award to help pay for her lease of Rosie as well as lesson and showing expenses.

“Rosie was the first Thoroughbred that I had ever ridden and will definitely not be the last!” said Standing. “Thoroughbreds have so much to offer and put their hearts into everything that they do.”

Created and announced in October 2011, T.I.P. recognizes and rewards the versatility of the Thoroughbred through sponsorship of Thoroughbred classes and high point awards at sanctioned horse shows, year-end performance awards, a recreational riding program and non-competition awards. Additional information about T.I.P. is available at tjctip.com and on the T.I.P. Facebook page at facebook.com/tjctip.