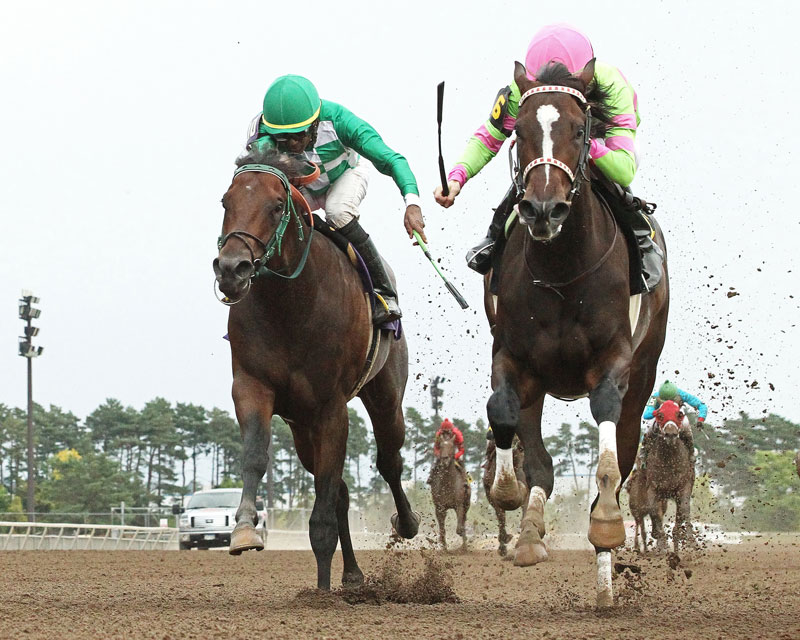 The $75,000 Shakopee Juvenile, which featured three of the fastest 2-year-old Thoroughbreds in North America, lived up to the hype on the final day of the meet Saturday at Canterbury Park as the two favorites, Amy’s Challenge and Mr. Jagermeister, battled to the finish line with Amy’s Challenge and jockey Jareth Loveberry prevailing by three-quarters of a length in 1:09.58. Amy’s Challenge, the public choice at 4 to 5, led up the backstretch and through the turn of the six furlong sprint before being challenged and headed by Mr. Jagermeister and jockey Andrew Ramgeet as the two turned for home. Amy’s Challenge fought back gamely on the rail to win.

Amy’s Challenge, who was named Horse of the Meet by a vote of media members and racing officials, is trained by Mac Robertson and owned by Novogratz Racing Stable. She returned $3.60 to win. Her connections have suggested that the next start may be at Keeneland in the Grade 1 Alcibiades on Oct. 6. Mr. Jagermeister, a Minnesota-bred colt, is trained by Valorie Lund. My Sweet Emma finished third, 18 lengths behind Mr. Jagermeister, and Soul of Discretion was fourth.

The $50,000 Tom Metzen H.B.P.A Sprint also went to a Robertson runner as Sir Navigator won by 1 1/2 lengths with Israel Hernandez aboard. He is owned by Jer-Mar Stable LLC and paid $11.20.

Robertson, who won five races Saturday, won his 11th training title at Canterbury. He finished the season with 69 wins and a record $1,763,068 in purse earnings. Loveberry, riding at the Shakopee, Minn. racetrack for the first time this season, won the riding title with 74 wins. He had three wins on closing day. The leading Thoroughbred owner was Novogratz Racing Stable who also won the final race to pass Curtis Sampson for the award with 17 wins on the season.

The 67-day meet concluded with a slight gain in total handle, the amount of dollars wagered, compared to last season even though six fewer races were run in 2017. Total handle was $43.67 million, a .9 percent increase, while average daily handle was up 3.9 percent at $651,839. The number of starters per race increased 4.1 percent, another positive indicator.

“Overall the race meet was a success,” company president Randy Sampson said. “We are very fortunate to have the support of both race fans as well as horsemen that each contribute to making Canterbury Park thrive.”