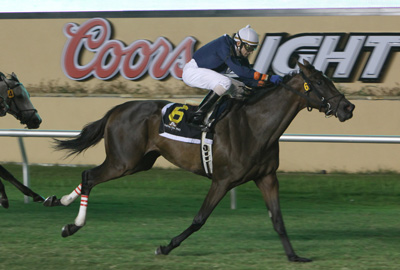 A patient trip for Patty’s Pride paid off in Friday’s $50,000 Ricks Memorial Stakes at Remington Park. The filly roared home over the final three furlongs to score going away by 1 3/4 lengths in the one-mile race over the firm turf course.

Owned by Brian Schartz of Kennett Square, Pa. and trained by Karl Broberg, Patty’s Pride was handled by jockey Glen Murphy. She sat seventh in the field of 10 until the final turn when her rider was able to swing her out and around traffic for a smooth run for the finish.

“I liked where I was at because I thought the pace was going along pretty quick,” Murphy said about his trip up to the stretch. “I just wanted to let the race unfold in front and see where everyone was. When I turned for home she kicked into gear and took it to the wire.”

Guanabara Gal and Devil In Diamonds set a dueling pace, posting fractions of :23.70 for the quarter-mile, :46.99 for a half-mile and then 1:11.11 for six furlongs before giving way to late runners. Patty’s Pride finished ahead of Gorgeous Melody, who was a nose better than Someplace Else who wound up third.

Remit was the 3-2 wagering favorite, finishing fifth while trailing much of the race and never threatening late.

Bred in Texas by her owner, Patty’s Pride is by Special Rate from the Air Forbes Won mare Solo Rolo. She won her sixth career race from 30 attempts and her first ever at Remington Park. The Ricks Memorial was worth $30,000 to Patty’s Pride and boosted her lifetime earnings to $219,844. Special Rate, a stakes-winning son of Pulpit and half brother to Grade 1-winning millionaires Sightseek and Tates Creek, stands at Key Ranch near Salado, Texas.

The Ricks Memorial is named in honor of Ran Ricks Jr., who was the first owner to stable a horse at Remington Park in 1988 when the barn area opened. Ricks was a prominent breeder and owner in Oklahoma and was instrumental in helping bring pari-mutuel horse racing to the state in the early 1980s. He won seven leading owner titles at Remington Park before his passing in late 1996.

Patty’s Pride provided both Broberg and Murphy with natural hat tricks on the Friday race card. They teamed to win the two races preceding the Ricks Memorial with Storm’s Promise ($9.20 to win) in the sixth race and V L T Or Bust ($14.60) in the seventh.

The three wins for Broberg give him seven on the season and put him into a second-place tie with Bret Calhoun in the trainer standings. Both trail Steve Asmussen by one as he leads with eight triumphs.

Murphy’s three wins jumped him to nine for the season and put him in a three-way tie for second in the rider standings with Bryan McNeil and Luis Quinonez. Cliff Berry leads the colony with 12 wins.