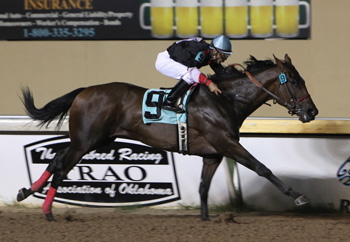 Imahit posted a 10-length win for his first career triumph in April while racing at Lone Star Park in Grand Prairie, Texas. Saturday night the 3-year-old had his first opportunity in the state where he was bred and easily rolled to a nine-length win in a $36,800 Oklahoma-bred allowance event.

Owned by Clint Gilchrist of Edmond, Okla. and trained by C.R. Trout, Imahit was ridden by Luis Quinonez. The gelding was allowed to settle second, just a length off the pace-setter Rock This Bar, for the first half-mile of the race before Quinonez let him roll. Taking over going into the final turn, Imahit stretched his lead through the remainder of the race before eventually cruising under the line with plenty in reserve. He handled the mile in 1:38.31 over the fast track.

The second career win from five attempts was worth $21,043 to Imahit, an Oklahoma-bred 3-year-old by Whywhywhy from the Sahm mare Halo Hit. Bred by Trout, Imahit now has a career bankroll of $40,418 and an apparently bright future, especially against state-bred company.

Remington Park racing continues with a special holiday afternoon program on Labor Day Monday, Sept. 3. The first race begins at 1:30pm. There will be activities for kids and $1 pricing on many concession items on the Plaza.