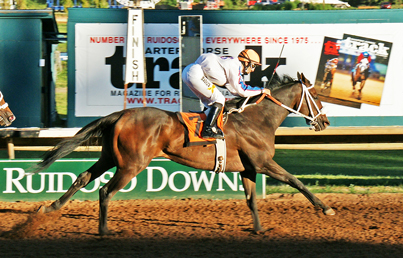 M.H. Carson’s King Coral went to the lead out of the gate and set all the early fractions in the one-and-one-sixteenth-mile test. Ol Winedrinker Who took the lead and the top of the stretch, but King Coral fought gamely along the rail and was beaten by one-and-one-half lengths.

From the Joel Marr barn and ridden by Carlos Madeira, Ol Winedrinker Who was making his first start since June when he won the San Juan County Commissioners Handicap at SunRay Park. He also won the $150,000 Zia Park Distance Championship last November. The 5-year-old gelding by Sligo Bay (Ire) now has a record of 25-9-4-3 with earnings of $437,847.