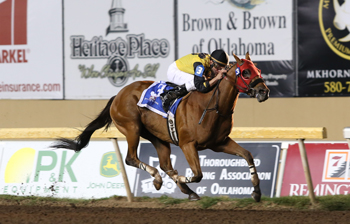 The Opening Weekend of the 2015 Remington Park Thoroughbred Season featured a pair of stakes races on Saturday night. Texas-bred Ivan Fallunovalot pulled away to win the $76,600 David M. Vance Sprint for the second straight year, while Smack Smack won a stretch battle to take the $175,000 Governor’s Cup.

National Racing Hall of Fame Jockey Calvin Borel made a rare appearance at Remington Park in order to ride Ivan Fallunovalot. The 5-year-old gelding made the trip worth Borel’s time, drawing away to win the Vance Sprint by 3-3/4 lengths.

Borel has ridden Ivan Fallunovalot throughout his 2015 campaign. Those efforts included stakes outs at Oaklawn Park in Hot Springs, Ark. where he won the $100,000 King Cotton Stakes before running second in both the $100,000 Hot Springs Stakes and the Grade 3, $300,000 Count Fleet Sprint Handicap. Borel has extreme confidence in the ability of Ivan Fallunovalot and liked the way he overcame a less-than-perfect start.

“He didn’t break that sharp but I think he, more or less, was checking out the lights. He was kind of jumping the shadows at first,” Borel explained. “There was a lot of speed, so I let them go on. He’s the best horse and I thought he’d overcome it and he did. He’s a nice colt and I think he’s getting better and better.”

Better to the point of consideration for an attempt in the Breeders’ Cup Sprint, according to Tom Howard, trainer of Ivan Fallunovalot. “We’re thinking about it.”

Owned by Lewis Mathews, Jr. of Bismarck, Ark., Ivan Fallunovalot kicked clear of his rivals by mid-stretch and held the advantage over a late charge by Imahit. Delaunay was third, four lengths behind Ivan Fallunovalot who handled six furlongs in 1:09.01 over a fast track.

The second Vance Sprint win for Ivan Fallunovalot was his 10th victory overall from 18 starts. A Texas-bred son of Valid Expectations from the Horse Chestnut (SAF) mare Flashdance Missy, Ivan Fallunovalot made $45,000 to boost his career earnings to $416,910. He was bred by Eileen Hartis.

The Vance Sprint is named in honor of the founding president and general manager of Remington Park, David M. Vance, who was on hand to present the trophy in the winners’ circle.

Smack Smack Wins $175,000 Governor’s Cup
As a 2-year-old, Smack Smack showed potential, winning the Clever Trevor Stakes at Remington Park. However, inconsistency became the norm in following months, putting a damper on the once high hopes.

The good times may be returning for Smack Smack. He waited just a few lengths off the leaders along the backstretch of the 1-1/8 miles Governor’s Cup before pouncing and prevailing in a hard-fought stretch battle to beat Russelin. Owned and bred by Toby Keith’s Dream Walkin Farms of Norman, Okla. and trained by Don Von Hemel, Smack Smack was ridden by Shane Laviolette who knew Smack Smack when he was younger.

“I actually worked him as a 2-year-old but didn’t get a chance to ride him,” Laviolette noted. “My horse made the lead and when he turned for home, he threw his ears up and was kind of waiting on (Russelin). I got after him late and he kicked on. He did (have something left), when I asked him, he responded late.”

“In his previous races, back last year and the year before, he would sit way back and make that one big run. Don wanted me to lay him up a little closer and make him kick it from there.”

The win is the sixth from 15 starts for Smack Smack, a Kentucky-bred gelding by Closing Argument from the Victory Gallop mare Smack Madam. The winner’s check of $105,000 for the Governor’s Cup boosted his overall bankroll to $352,264.

Close Races Early in Horsemen Standings
Retiring Jockey Cliff Berry posted one win on Saturday night, giving him three scores over the first two nights of racing. That total is good enough to share the lead in the rider colony with Jareth Loveberry as both have three wins.
A three-way tie exists at the top of the trainer standings with Brent Davidson, Bret Calhoun and C.R. Trout all with two wins.

Colleen Davidson leads the owner standings with two wins, posting a victory in each of the first two nights of the Remington Park Season.

The normal weekly schedule of racing at Remington Park now goes into effect starting Aug. 19 as Wednesday thru Saturday activity begins. Next week’s stakes races include the $50,000 Red Earth Stakes at 7-1/2 furlongs, over the turf, for Oklahoma-breds on Friday. The Saturday night offering is the $75,000 Edward J. DeBartolo Memorial Handicap, over the turf at 1-1/16 miles. The first race nightly is at 7pm-Central.