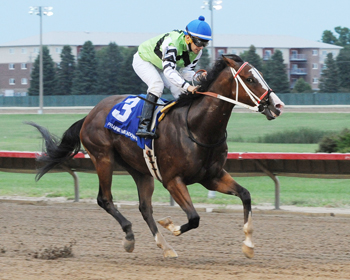 by Todd Lieber
The largest crowd of the season packed Prairie Meadows Racetrack and Casino August 8 for the 23rd consecutive renewal of the Iowa Classic with seven stakes for Iowa-breds offering $585,000 in guaranteed purses.

Jody Mueller’s Shock Hazard proved a repeat winner of the $75,000 Dan Johnson Memorial Sprint (formerly named the Iowa Classic Sprint), grabbing an early lead and sprinting to the wire 4¾ lengths clear of Dixie Surge in 1:10.71. The 4-year-old son of Dunkirk is trained by Jon Arnett and was ridden by David Mello, who recently returned to the saddle after being sidelined for more than three months this summer with a broken pelvis. Bred by Burden Creek Farm and Clifton Farm LLC, Shock Hazard is a 2012 ITBOA fall sale graduate

Iowa-based stallion Woke Up Dreamin had a “dream night” as his offspring took both of the $75,000 classic races for juveniles. Long-time Iowa breeder Don Downing’s homebred Dreamin, trained by Tim Martin and ridden by Belen Quinonez, took the Iowa Sorority at whopping odds of 41-1 after a seventh place finish in the Iowa stallion futurity in his last start. Sent to the front in his previous races, this time Dreamin rallied from far back into blazing fractions of 21.4 and 45.3 set by It’s The Swede and Mywomnfromtokyo. Time for the six furlongs was 1:12.54 In the Iowa Cradle, Umbrella Stables III LLC’s One Fine Dream, a son of Gary Lucas and Linda Woods’ multiple stakes winner and Iowa champion One Fine Shweetie, surged through an opening along the rail late to just catch No Holds Barred. Another ITBOA sale graduate, One Fine Dream is trained by Chris Richard and was ridden to victory by Alex Canchari in 1:11.73.

The $80,000 Iowa Breeders Derby for 3-year-old males featured the local debut of Winstar Farm’s Net Gain, who is based at Churchill Downs with trainer Bill Mott. The son of Include – Triple O Five, who brought down the gavel for $325,000 at the OBS 2014 two-year-olds-in-training sale, was seeking his first stakes victory after breaking his maiden on the inner dirt at Aqueduct in February and finishing close up in subsequent stakes races at Laurel and Woodbine. Despite being burdened with the outside post in a field of thirteen, he was sent off as the 1-5 favorite and did not disappoint, making a sweeping move around the turn and drawing off to win by a comfortable 6 1/4 lengths under Terry Thompson. “He settled further back than we’d planned and he didn’t like the dirt,” Thompson said, “but I had to save ground somewhere. Once he got his footing he really went.” Time for the mile and 1/16th was 1:47.24. Bred by Lane Thoroughbreds, Net Gain is a half brother to Cat Five O, winner of the Mistletoe Stakes at Remington Park.

In the $80,000 Iowa Breeders Oaks, the meet’s leading rider, Ramon Vazquez, used a ground saving trip aboard Wait N C Spring to give owner Allen Poindexter and trainer Lynn Chleborad a Classic Night victory. Poindexter had purchased the son of Spring at Last from breeder Mario Silva for $30,000 at the Keeneland January 2013 horses-of-all-ages sale. He covered the mile and seventy yards in 1:45.51.

The twin $100,000 features for older horses went to classy veterans, both of whom were favored despite not having found the winners circle in multiple starts this year. In the Ralph Hayes at 1 and 1/16 miles for colts and geldings, Russell Placzek, Steve Oeschlager, and Rick Engels’ Oh My Gravy hugged the rail under jockey Glenn Corbett and drew off by 6 and 3/4 lengths in 1:45.3. The victory marked the ninth year in a row that trainer Kelly Von Hemel has saddled at least one classic night stakes winner. The meet’s leading owner, Danny Caldwell, leading trainer, Frederico Villafranco, and leading rider Vazquez combined to score in the mile and 70 yards Donna Reed with Rallydownthealley, who rallied wide and just got up at the wire . It was sweet revenge for both winners, Oh My Gravy having come up a head short in the 2013 Iowa Breeders Derby, while Rallydownthealley finished 2nd by a similar margin in last year’s Donna Reed.

Despite rain showers that sent the crowd scurrying inside before the fourth race and again after the sixth, the track remained listed as “fast,” and on-track handle for the ten –race card was a season-high $124,315.