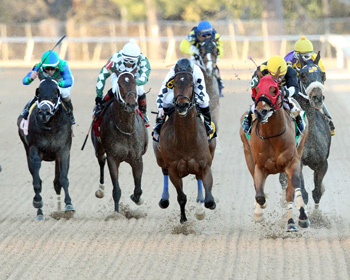 Multiple stakes-winning sprinter Ivan Fallunovalot, the 2015 Texas Horse of the Year, is iffy for the $100,000 Hot Springs Stakes Saturday at Oaklawn because of a quarter-crack that popped up on the inside of his left front foot earlier this week, trainer Tom Howard of Hot Springs said Sunday morning.

Howard praised the work of Fires, the nephew of trainer Jinks Fires of Hot Springs.

Ivan Fallunovalot, in his 2016 debut, defended his title in the $100,000 King Cotton Stakes Jan. 30 at Oaklawn. He had finished second in last year’s Hot Springs and Count Fleet.

This year’s Hot Springs closed Friday with 41 nominations. Subtle Indian, a two-time allowance winner at the meeting, and multiple stakes winner Hebbronville are scheduled to run in the 6-furlong Hot Springs.