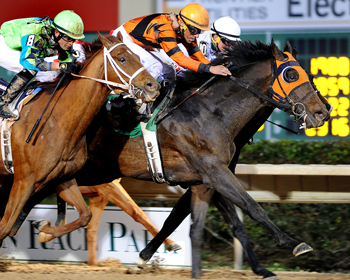 Saturday’s Maxxam Racing Festival featured four stakes highlighted by the running of the $100,000 Maxxam Gold Cup. A field of 11 was assembled for the mile and one-eighth main track event and the winner was Tigertail Ranch’s homebred Mobile Bay.

This was the second stakes appearance here this meet as the 4-year-old ran on the turf in the Grade 3, $200,000 Connally Turf Cup last month. Tonight he returned to his preferred main track surface and distance and topped a very contentious field. Trained by Victor Arceneaux, the Louisiana-bred won the Zia Park Derby and closed for second in the Louisiana Classic at Fair Grounds.

Jockey Francisco Torres guided the dark bay colt, sitting off the early pace set by Coup De Grace. He began to close at the top of the stretch, crossing the wire in 1:50.35, winning by a neck over Jessica’s Star.

“When you get these quality horses running for this money, you know they are going to show up,” said Torres. “They set some fast fractions, but that set up well for us. He carried me all the way around and had plenty left. I had total confidence in him.”

“Cisco gave him a great ride,” said Arceneaux. “Whenever he started picking them up on the backside, I thought we would be in contention. He likes the mile and one-eighth distance and we are very excited!”

Mark Breen’s graded stakes winner Jessica’s Star, made a very good comeback off a seven-month layoff for trainer Michael Stidham. The 5-year-old son of Magna Graduate, who stands at Rockin’ Z Ranch in Oklahoma, was scratched out of last Saturday’s Grade 3 $125,000 Mineshaft Handicap, and stayed close to the early pace under rider Mitchell Murrill. He was still prominent down the lane and held second.

“Mike Stidham is a great trainer and really had him ready,” said Murrill. “We had a great trip and a good, successful run. We just got caught at the end.”

Hawaakom ran third under Miguel Mena with Coup De Grace holding on to complete the superfecta.

The $100,000 Maxxam Gold Cup at Sam Houston Race Park has had a rich tradition since its first running in 1994. Past champions of the mile and one-eighth main track feature include Sir Cherokee, Reporting for Duty, Student Council, Alumni Hall, Cease, Unstoppable U and Red Rifle. Last year’s Maxxam champion was Brereton Jones’ homebred Albano.

He shipped in Mexican Miss a 5-year-old daughter of More Than Ready and she topped a full field the $50,000 Jersey Lilly Stakes. Owned by Brad Grady, she had been  game in each of her starts in the Fair Grounds meet, and made the most of her stakes debut in the mile and one-sixteenth Jersey Lilly.

Mitchell Murrill was the winning pilot, picking off horses and winning by a neck, in a final time of 1:43.75.

“When I came around the last turn, she just took off, like the nice mare she is,” said Murrill.

Sharp felt his filly belonged in stakes company and was grateful to his owner for his patience.

“She showed that she was worth the wait,” said Sharp. “Brad was very patient and this was her first stakes win and deservedly so.”

Cassatt, owned by Fox Hill Farms Inc. and Hill ‘n Dale Equine Holdings Inc., went to the early lead under replacement rider Adrian Ramos as Florent Geroux, who won two stakes this afternoon at Gulfstream Park, could not make the flight from Florida. She finished second, but bore out against Expect Royalty, and was disqualified and placed third.

Trainer Larry Jones had wanted to try the 5-year-old daughter of Tapit on the turf. He was disappointed, but hopefully will give the speedy mare another try on the lawn.

Mexican Miss, sent off at odds of 10.90-1, returned $23.80 for the win. Multiple stakes winner Expect Royalty paid $18.00 as the runner-up, followed by Cassatt and Whiskey Eyes.

Newport Racing Stables LLC American Sailor went to the lead under rider Miguel Mena and never looked back. Claimed for $30,000 at Fair Grounds, the 4-year-old son of City Zip, crossed the wire in :56.92.

This was the first time Mena rode the Kentucky-bred, who tuned up for this stakes with a four-length victory on February 7 at Fair Grounds.

“Joe told me that the horse was doing really well and to take advantage of his speed,” said Mena. “That’s what I did. I stayed out of his way; fast horses win races.”

James Graham piloted El Botas for owner Brad Grady, finishing second by a neck. Sharp was proud of both stablemates.

“American Sailor is a fast horse and when you get a horse from Brad (Cox), you know they are well taken care of,” said Sharp. “He was pretty much lone speed in a five furlong turf race, which is hard to find. El Botas is another horse that was a great claim; he’s a developing horse, and we’ll find the right spot for him.”

Tonight, another rising star Two Step Time showed he was a 3-year-old with a bright future. Trainer Mike Makershipped the son of Two Step Salsa from Florida in pursuit of his third lifetime win. Owned by Get Away Farm, the dark bay colt just missed in the $100,000 OBS Championship on January 26. With a well–timed ride from Robby Albarado, Two Step Time ($7.80) closed for the win, covering the mile and one-sixteenth feature in 1.43.90.

Albarado and Maker teamed up at Fair Grounds winning the Black Gold Stakes with Oscar Nominated.

“I was glad I didn’t have to run them against each other,” said Maker. “It was a good day!”

“This is such a nice turf course,” said Albarado. “I always love riding here and was glad to get the win. Two Step Time has some learning to do, but ran very well tonight.”

Two Step Time will make his next start at Turfway Park, according to Maker.