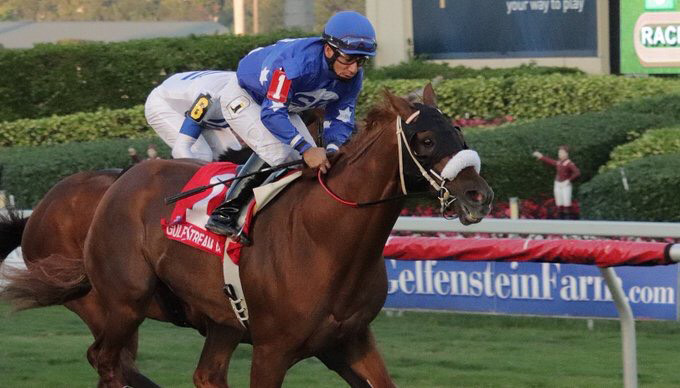 Multiple stakes-placed Durocher, a Texas-bred son of Niagara Causeway, managed to collect his first stakes victory Saturday at Gulfstream Park, benefiting from a ground-saving trip to score an 18-1 upset in the $75,000 Tropical Park Derby.

Ridden by Paco Lopez, Durocher broke well from his No. 1 post position to track pacesetter General McGooby around the first turn and down the backstretch past fractions of :23.80 and :49.43 for the first half mile. General McGooby showed the way into the stretch with Secretary At War and Mr. Cub directly to his outside. When Secretary At War weakened in mid-stretch, Lopez found running room and maneuvered Joseph Russo-trained Durocher three wide for his winning drive.

“The trainer told me the last couple of races he had a few troubles, but he’s a nice horse and is training great. My horse broke perfect and we had a perfect position,” Lopez said. “We were a little tight by the three-eighths pole, but when I took him out, I had plenty of horse left and we won easy.”

The exacta proved to be a nice hunch play for fans of the Chicago Cubs, as Leo Durocher was manager of the storied franchise from 1966 to 1972, which included the latter part of the career of Mr. Cub, Ernie Banks. The Durocher-Mr. Cub exacta paid $654.20.

Durocher, who finished a fast-closing third in the Dec. 2 Claiming Crown Emerald for trainer Harry Benson, ran 1 1/16 miles on the turf in 1:42.11 in his first start for Russo.

“Paco rode him perfect. He sat just where we wanted him to and we said just take it from there. Turning for home it was all in his hands and everything worked out great. I knew he had them. This horse was doing so good. It’s a great feeling,” said Russo, crediting Benson with Durocher’s preparation for the Tropical Park Derby.

Durocher, who is owned by Sterling Racing LLC, John Herzberg and Michelle Allan, broke his maiden for a $25,000 claiming tag in February in Gulfstream and has steadily improved into a steady stakes performer. His record now stands at 13-5-0-4 with earnings of $135,173. He was bred by La Bahia Stud, which owns his sire Niagara Causeway and stands him at Buck Pond Farm in Kentucky. Niagara Causeway formerly stood in Texas.

“If you notice the last race, the last time he ran past the wire he finished with a lot of energy,” Russo said. “He’s just a big good-looking horse and he tries every time. You can’t ask for better than that.”